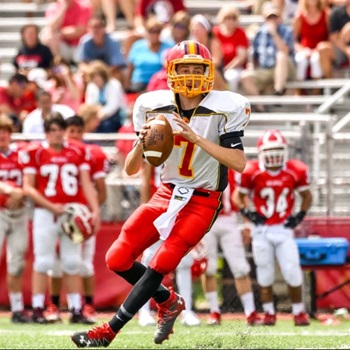 After backing up Riley Cooper last season, Jack Meyers was named the starting quarterback for the BHS football team this fall. Playing sports since he was six years old, Meyers has learned a lot, made memories, grown as an athlete and person, and now shares how he has gotten to this point, his favorite aspects, goals, and more.

Q: After 3 years of BHS football, what is your favorite aspect?

A: “The brotherhood that is made each season. You play and grind out a whole year with your brothers and you become closer and closer with everyone every year. Now entering our fourth season together as a team, the players are extremely close. We like to joke around a little at practice and have some fun, which makes football something that we all look forward to every day.”

Q: As a three-sport athlete, basketball, football, and baseball, what are your goals after high school, athletic wise?

A: “I plan on playing baseball in college. I’m excited to finally be able to focus on my favorite sport but I also am going to miss the fun and the relationships that I made in football and basketball.”

Q: With already two games down, what are your team and personal goals for the rest of the season?

A: “Our goal, especially after these first two games, is to just get better every single week. We have had a lot of penalty yards and everyone has little things that can be improved. If everyone does their job and improves each week, we’ll be a force to be reckoned with in the postseason.”

Q: Does coming off of a state championship last year change anything for you for this season?

A: “I think it puts a target on our back. Other teams are looking to play us and try and get the better of the 2017 state champs. All of the teams we play are going to give us their best effort. But as a team we aren’t worried about defending a title, we’re just worried about taking one week at a time and working hard so we can play together as brothers for as long as possible and try to end our last football season with a win.”

Q: How is it now taking over the role as starting quarterback and replacing the state championship quarterback, Riley Cooper?

A:  “The biggest part about taking over a starting job is getting used to the game speed at the varsity level. I got very few snaps last year so it was very important to get that first game under my belt. There is not much you can do to simulate a real game against a real opponent. Now that I’ve had two varsity starts, our offense has started clicking and I’m getting used to the game speed.”

Q: What have you learned from your team, coaches, and former players that have helped you achieve your goals in football?

A: “The coaches have been amazing in everything they do. They get on you sometimes to make sure that you’re working hard, but they are also there to help point you in the right direction when you mess up. Off the field, all of the coaches are also extremely helpful. Whether it helps in a class you’re having trouble with, getting extra reps, or you just need someone to talk to, the coaches in all the sports programs at our school are always there to help.”

A: “I’ve been playing football, basketball, and baseball since I could walk but the first time I played them in organized leagues was when I was six years old. All of my sports have shown me the importance of working hard, being a respectable citizen, and being competitive. Participating in them has also introduced me to new people and has connected me to my closest friends better than anything ever could.”

Q: What are you most excited for your senior football season?

A: “Running out under the Friday night lights with the brothers that I have been playing with for the past three years.”