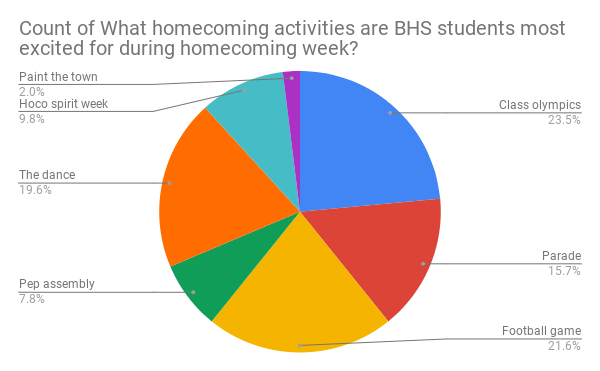 By Morgan LaSalle and Venessa Plourde

Batavia High School is hosting its annual Homecoming week Sept. 17-22. The theme this year is “vacation across the nation.” Through the week, students will participate in many activities that will put them in the school spirit. Homecoming is a week of celebration of BHS and everything it stands for.

Senior, Lily Zofkie shares that her favorite part of homecoming is spirit week because “that’s always the most fun part about homecoming, it’s the build-up to it, and getting ready for it.” Like many students, Zofkie’s focused attention is on the eventful spirit week. Students have an opportunity to express their school and class pride as much or as little as wanted.

“…Being a senior, I know in past years I have not really participated in spirit week… so this year being my last year I’m going to go all out,” Zofkie said. “It’s going to be great. I’m going to make the best of it because it’s my last one.”

For the senior class, it’s expected that they take spirit week to the extreme.

Homecoming is a right of passage to many new high schoolers.

What students don’t realize is that lots of planning and preparation go into the festivities of homecoming.

“I feel like people are like ‘oh homecoming it just happens’ but it doesn’t just happen, it is a lot of work,” said student council vice president Olivia Murchie.

In order to pull off a smooth homecoming, most of the work is done prior to the school year.

“Basically, 80 percent of homecoming [planning] is done before the school year even starts,” Murchie said.

The student council has many meetings over the summer getting ideas and themes approved. Many phone calls, emails, and stressful nights go on behind the scenes in the making of a smooth homecoming.

This year, homecoming week is kicked off with class color day on Monday. Freshmen wearing in orange, sophomores donned in purple, juniors cloaked in green, and Seniors shrouded in blue all roam the halls waiting for the class Olympic battle to commence in the evening.

Tuesday students dress to their designated class theme. Representing regions from areas to vacation across the nation, Freshmen look like they’re stepping out of the wild west, Sophomores dressing for the big apple, Juniors representing the west coast, and seniors relaxing in a Hawaiian fashion.

On Wednesday the whole school will dress to represent America and gather later in the evening for the town-wide parade.

Class t-shirts, designed by student council, are worn on Thursday. During the evening, the Batavia School District will host the induction of eight citizens into the Hall of Honor.

On Friday, the whole school shows their bulldog pride wearing red and yellow to the pep assembly. At night, the Homecoming football game will be played against Wheaton Warrenville South.

Saturday evening the week of homecoming festivities will come to a close with the homecoming dance at Batavia high school, wrapping up the spirit-filled week.