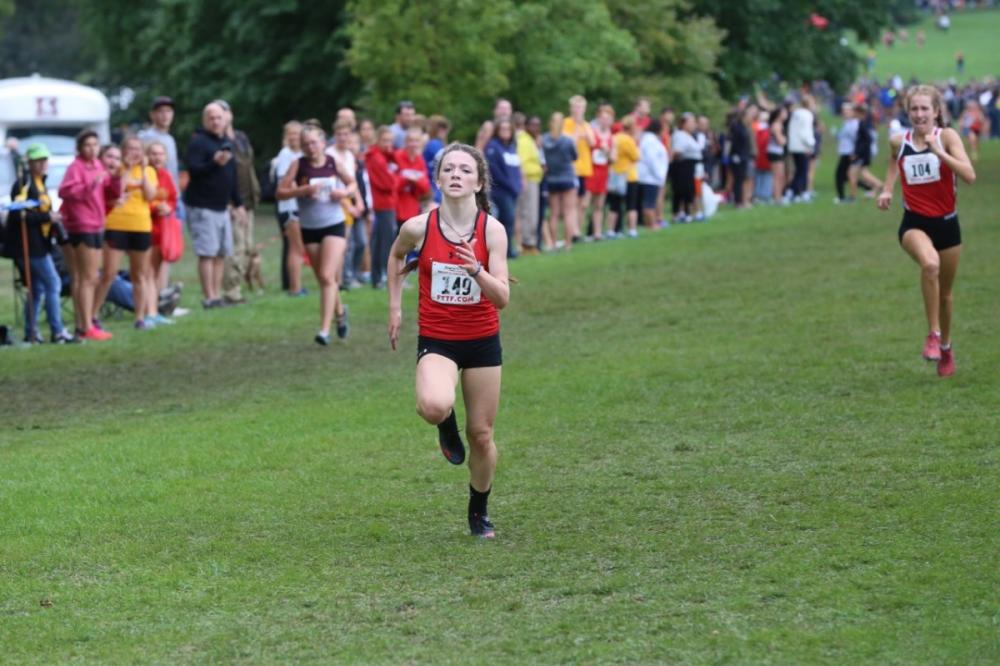 Coach Chad Hillman has had many talented runners come through in his 20 years as Batavia High School head cross country coach, but he thinks freshman Katrina Schlenker has the potential to be the fastest runners he’s ever coached. On Sept. 8, Schenker broke a 16-year-old school record in the “First to Finish” in Peoria, her first high school cross country race, running the 3-mile in a time of 16:42.6.

Her coaches and teammates hope to see her continue to succeed and improve for the next four years at BHS. The “First to Finish” builds off of Schlenker’s past success in middle school cross country. Shlenker was an IESA 2017 state champ, IESA 2017 sectional champ, and IESA 8AA champ in the 1600 meter and 800 meters in 2018.

Peoria’s “First to Finish” had a total of 300 3A girls competing in what was said to be the biggest race of the week in Illinois. Shlenker said she was ready to run this race due to the cancelation of the one prior to the week, but didn’t know what to expect since there were so many schools all over Illinois coming to compete.

“She prepared for the race with great training and with a strong race plan. She always works hard and hard work gets rewarded,” Hillman said.

In the beginning and for the rest of the  “First to Finish,” she was in with the front pack.

When the race was almost at the end, Molly Fitzpatrick, a sophomore from Barrington High who competed at state last year, was just about a few meters behind trying to overtake Schlenker. From the support of her teammates and crowd roaring her name, Shlenker decided to make a move within 100 meters left. She surged to the finish line and beat Fitzpatrick by two seconds.

“I was ecstatic and thrilled from all the support I got from my teammates. It was so surreal to me because I didn’t expect to do this well in the race,” Schlenker said.

Shlenker had previewed the course and talked about her strategic plan leading into the race. She made sure that she got eight hours of sleep and ate enough carbs the night before so that she could perform well.

“I got to walk the course and my plan was to start off not too fast but aggressive because it was a longer race that I was used to from previous years,” Schlenker said. “I tried to maintain a good pace so that I could finish off the race strong.”

The preparation did pay off according to her head coach.

“I was very proud of her race execution and it was a lot of fun watching her race,” Hillman said. “She is a great competitor and has a great desire to win.”

All in all, her teammates and coaches said that they are very proud of her performance. In her next four years of BHS, they hope to see that she continues to succeed and improve.