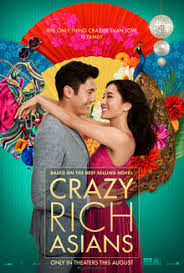 The novel Crazy Rich Asians by Kevin Kwan was brought to life when the film was recently released on Aug. 15. Watching this movie was like a comparison of Cinderella living in the 21st century. This romantic comedy will make you laugh so hard that you are in tears of joy.

The movie generally was extremely humorous and the cast was perfectly fit for their role. They made the movie come to life with the funny lines and great acting. The plot is interesting and has a great climax, which captures the audience attention. It is definitely a movie that will keep you interested because the audience never knows what to expect.

Crazy Rich Asians star actress Constance Wu plays Rachel Chu. Rachel is an economics professor who lives in New York City. She is currently just living her dreams out and being with her love Nick Young who is played by Henry Goulding. Rachel gets an invitation to go to Nick’s best friend wedding in Singapore. She agrees to accompany him on the trip and meet his family.  Little does she know that Nick is from a family that is impossibly wealthy, and he’s perhaps the most eligible bachelor in Asia. His family doesn’t even know of her existence and is very picky about who he marries.

As the movie continues Rachel figures out what kind of person he is to the society, and she realizes that every single woman in his prestigious class is incredibly jealous of her.  They try every possible way to bring her down.

Nick’s mother Eleanor highly dislikes her and doesn’t approve of their relationship.

Rachel needs to make it her priority to make his family like her.

All in all, the movie was great and is definitely perfect to go watch with your family or friends.  I would rate this movie five stars overall because of the great content and humor.