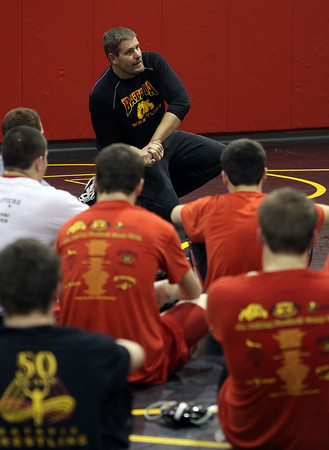 By Mia Wells and Morgan Haug

Packs of boys entered the gym to compete and floods of people arrived to watch the matches. Boys wrestling championship banners surround the gym walls. Mats covered every square inch of the floor for competitions. The audience could see all the boys getting ready for their matches, stretching, and walking around listening to music but in the distance, there was only one girl warming up on her own, but that could change this year.

For the first time ever, Batavia High School sought out girls to join its wrestling team. From here on out, the Illinois High School Association has deemed girls wrestling as an emerging sport.

“We have always allowed girls in our club but this year the state has labeled girls wrestling as an official sport,” said Batavia’s head wrestling coach Scott Bayer.  “In my time here, we have not had one girl on our high school team. This year the IHSA is trying to get schools to drive interest in girls participating in wrestling.”

Batavia’s community is filled with young athletes with an interest in wrestling who have joined the coed Batavia Wrestling Club but Batavia has yet to have a girl join their high school team. BHS has encouraged girls’ wrestling since the day it was announced. Signs have been hung around the school and social media posts have been expressed to promote girls wrestling.

“I’ve been grappling since I was 5 years old and both my brother and dad are/were wrestlers in school, so I’ve been wanting to do it for quite some time,” said Julia Pelech, who is going to be one of the first girls on the wrestling team. “When I saw the poster for girls wrestling this year, I knew that I had to do it or I would be cheating myself out of something I’ve wanted to do for years.”

The team is set on thinking that this will be a great thing for the wrestling program. Bayer does not believe it will affect the team in any enormous ways but the outcome will be a positive thing.

“It will not have any bearing on the boys’ team but it will improve the image and interest in the sport,” Bayer said. “That is why I am jumping in because I believe that the experience of wrestling is something that can transform one’s life for the better and that is not something that is a boys only thing.”

The returning wrestlers on the team are open to the new addition. Jordan Ramirez, a junior on the team, is excited to have girls try out.

“I’ve seen plenty of schools with girl wrestlers of their own and I think it’s a good thing that we are embracing this sport for our girls at Batavia,” said Ramirez.

Many of the male wrestlers have been “grappling” with girls since their childhood but have not had a chance to actually compete with them. Now, they may have to practice and compete together but it will mostly be the same gender competing against one another.  In this new change, the coaches, boys, and girls aren’t anticipating any problems.

“I think it will only be a good thing for wrestling,” Bayer said. “They are going to give everybody in the room, boys and girls, the best of what they got and they are going to teach them the values and skills of wrestling and that will have a tremendous effect on everyone.”

Aside from the views on girls wrestling itself, when asked,“ who is going to coach the girls and are they going to practice with the boys?”, Bayer said they’ll have the same coaches as boys but practice mostly against girls.

Wrestling consists of many opportunities for athletes, as well. Each year Batavia hosts “The Event.” This consists of a wrestling match against some of their biggest rivals. Being in the audience, a series of multi-colored flashing lights strike everyone’s eyes. Loud music blared through the facility while the wrestlers warmed up. The audience was packed with BHS students and supporters of the wrestlers. As time passed, the Batavia drumline stormed in only to leave the crowd cheering.  This upcoming season, “The Event” could potentially include competing female wrestlers. Even still, the wrestlers of any gender will still be able to be a part of such an experience.

“Wrestling is not the easiest sport,” Ramirez said. Sweat covering their bodies bruised up and sometimes bleeding, they get a quick water break. All standing in line, taking their quick minute of rest they get during the grueling practice.

Overall, the program is all for the change in this upcoming season. “I’m just excited to see how a wrestling team actually works,” Pelech said. “…It will be cool to be a part of a team works together.”