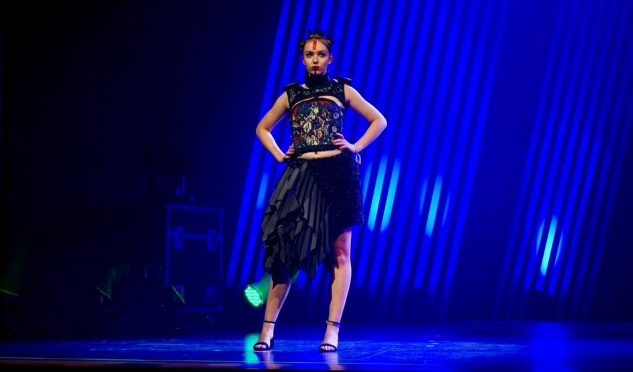 By Morgan LaSalle and Venessa Plourde

Lights bright and blazing, the crowd cheering and taken by disbelief at the announcement of her name to signal her victory. Preston Williams, an aspiring young artist, unexpectedly wins Rock the Runway.

“Rock the Runway is a theme based wearable art fashion show where students compete using anything but fabric. There are two categories: fashion and accessories,” said the official coordinator, Dawn Zalkus.

Williams took unique elements and transformed them into a dress fitted for the theme: power.

“I connected it to power by showing strength. To me, the materials alone didn’t look very strong, but when you put them together they really emanate power or strength and viciousness,” Williams said.

Williams used a combination of unusual materials to “emanate power” in her dress. For her dress, she glued together beads in a mosaic fashion and attached them to the bodice of the dress. She also made the popular concoction of slime, stretched it to the desired shape, let it dry, and finally painted it.

“I like to put a lot of little details in my dress,” Williams said.

The time-consuming process was not easy for Williams but she made sure to begin as soon as possible.

“It took me eight months to do my dress last year and I probably did the most work in the last four months.”

Williams began to craft her dress out of canvas base making it to the precise measurements of her model and close friend Sarah Dremel.

“I agreed to be Preston’s model because we have been good friends for a while,” Dremel said. “The first time I went to the show when it was barely filling up a few rows in the BFAC, I knew that one day Preston was going to be in it, as well. I’ve always loved going to the show, so when she asked me to be her model I was over-the-moon excited and very honored

After formulating a complex dress in her head and in her sketches, Williams set to the execution of the gown. After months of creating and trial and error, there were alterations to the original design of the dress.

“If we are being honest I just do what I want. One thing is that it kind of changes a lot over time. Like there is no set idea so it kind of just… I start out with something and I think something else would look good with it, then I’ll just make that. There is not one thing that particularly inspired me last year. I do like contrasting colors and I thought that it looked electric,” Williams said.

As a freshman, Williams had been unable to take any art classes in high school. She only had her previous experiences from middle school.

“…the only thing I had to go off of was the camps that I did from sixth grade through middle school,” Williams said.

On the night of the show, as Williams helped Dremel into the dress, disaster struck. The multi-piece dress was unable to stay fastened. Williams’ quick thinking led her to hot glue the dress on to Dremel. The dress was then modeled without a flaw.

As the awards were announced Williams was struck with the shocking news that she had won.

“I was so very shocked. My mom didn’t know what to think. I was only hoping to place. Shooting for third,” Williams said. The honor of winning Rock the Runway has instilled Williams with profound confidence in her work.

“It is nice to have a validation that my art is okay. I kind of liked it because I was a freshman and you wouldn’t expect a freshman to win,” Williams said.

“Rock the Runway gives the artists a place where their talent can be showcased, their voices heard and a sense of community,” Zalkus said.

The artists participating in the competition are given an opportunity to put their hard work on display.

The finished product is rewarding for not just the creator but other people, as well.

“Being a part of the show and bringing art to life is so cool,” said Williams’ model, Dremel. “It’s something that I never really thought I’d get to experience. It’s one thing watching it from the audience, but it’s completely different actually being on the stage. Wearing the art almost makes you feel like art-especially when everyone is coming up to you staring at you like you’re art at a museum.”

“It is a show with unbiased and anyone can do well and it doesn’t really matter if you are a senior or if you have won before because anyone can compete. That’s what I like about it,” Williams said.

“Art is sometimes forgotten so I think to have the entire BFAC filled with people coming to see what you’ve created, it’s something that they [artists] love. It’s the artists time to shine at this moment which is a great thing about this show,” Dremel said.