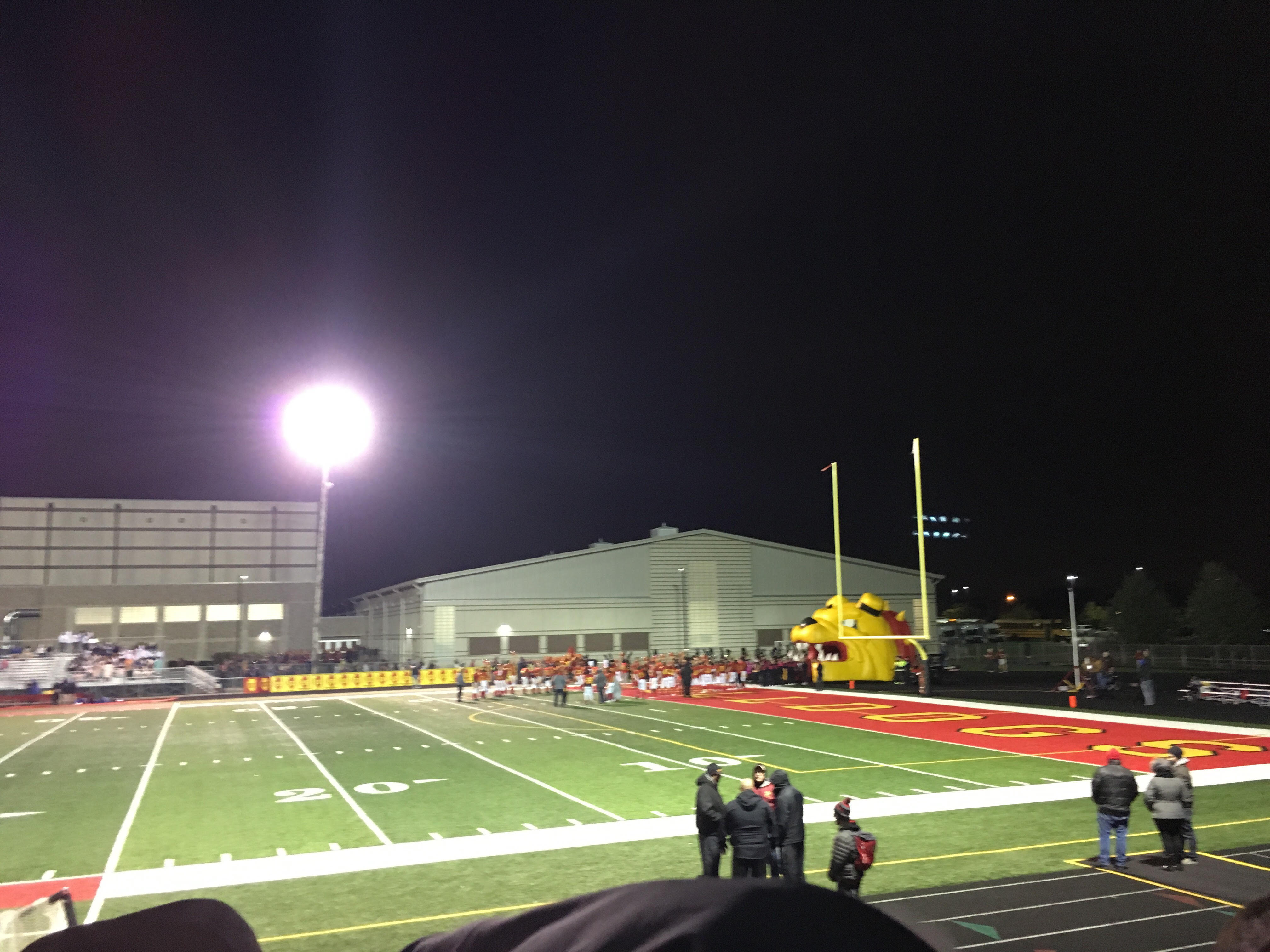 By Josh Bode and Andrew Nelson

Two high schools separated by 3.2 miles. A rich 105-year history. 99 football games played between these two schools. Many student-athletes, adrenaline pumping, are ready to take the field for the biggest game of the year. As the sun begins to set, and the lights start to turn on, the packed stands at Batavia High School’s football field turn their attention to the field as the 100th meeting of the Batavia-Geneva rivalry football game is about to kick off.

Batavia and Geneva have been playing against each other since 1913. Geneva currently leads the all-time series with a record of 51-44-5 against Batavia.

Both sides have gone through hot and cold streaks, as Geneva won 19 games in a row between 1967 and 1985, thanks to former head coach Gerald A. “Jerry” Auchstetter. Batavia is currently on an eight-game winning streak, as coach Dennis Piron has not lost a game against Geneva since taking over as head coach in 2011.

This rivalry has created tension between these two neighboring towns and is very special to many people.

“For me, it’s personal because I’m part of four generations of my family that have played in it,” current Batavia coach and former player Matt Holm said. His grandfather, father, and son have all played football at Batavia High School.

Current linebacker and second generation Batavian Reilly Corken talked about the specialty of the rivalry.

“From when we were kids, it goes all the way back to that. We were taught at the Jr. Bulldog Camp,” Corken said.

Coach Holm was a senior when Batavia snapped their losing streak against Geneva, saying “It was like we won the Super Bowl.”

Holm also explained other factors that contributed to the atmosphere of the game.

“All of Georgetown (a neighborhood to the north of Batavia High School) over here didn’t exist,” Holm said. “There was a big farmer’s field and there was a barn out in the middle of it and the barn caught on fire in the middle of the game. It was an inferno.”

Head Coach Dennis Piron said one of the most memorable games of the series for him was the 2006 playoff semifinal game. It was the second time Batavia and Geneva had faced off that year.

“Literally people were hanging on fences and trees that couldn’t get in because it was so crowded,” Piron said. “I just remember walking in there and going, oh my God this is what heaven is like for a football coach, because it was just beautiful. One of the greatest things I’ve ever seen.”

Batavia won that game 28-0 and moved on to the state title game; however, they suffered a 30-20 loss to Normal Community High School.

Ethan Neibch, a current Batavia wide receiver, said this year was the most memorable game for him.

“The 100th Game. Even though it wasn’t an especially good game, I just think it was really cool.”

“I think they’ve brought out the best in us,” Piron said of Geneva.

He said that in order for any Batavia sport to be good, the team must beat Geneva.

Piron also said, “the success that we’re having now against Geneva in recent years is a testament directly to the framework and the sacrifices Coach Gaspari made to get us to the point that we’re at right now.”

Coach Michael J. “Mike” Gaspari coached the Bulldogs from 1985 to 2010 putting up a 16-10 record against Geneva in that span. Piron said the culture at Batavia was very negative before Gaspari was the head coach, and Gaspari definitely helped change that.

In contrast, Geneva’s culture was thriving before that, as that was during their 19-game winning streak with the last one coming in Gaspari’s first year.

The 100th game was all Batavia. Geneva muffed the opening kickoff and turned it over to Batavia. The Bulldogs then put up 41 unanswered points and held the Vikings scoreless. Batavia’s defense continued its dominance, allowing Geneva to muster only 56 total yards.

As this was the 100th meeting between the two teams, it is expected that the rivalry will thrive for many years to come.

“I foresee it to maintain for a very long time, another 100 years,” said Batavia athletic director David Andrews. “There’s no reason for it to not be a thriving rivalry.”