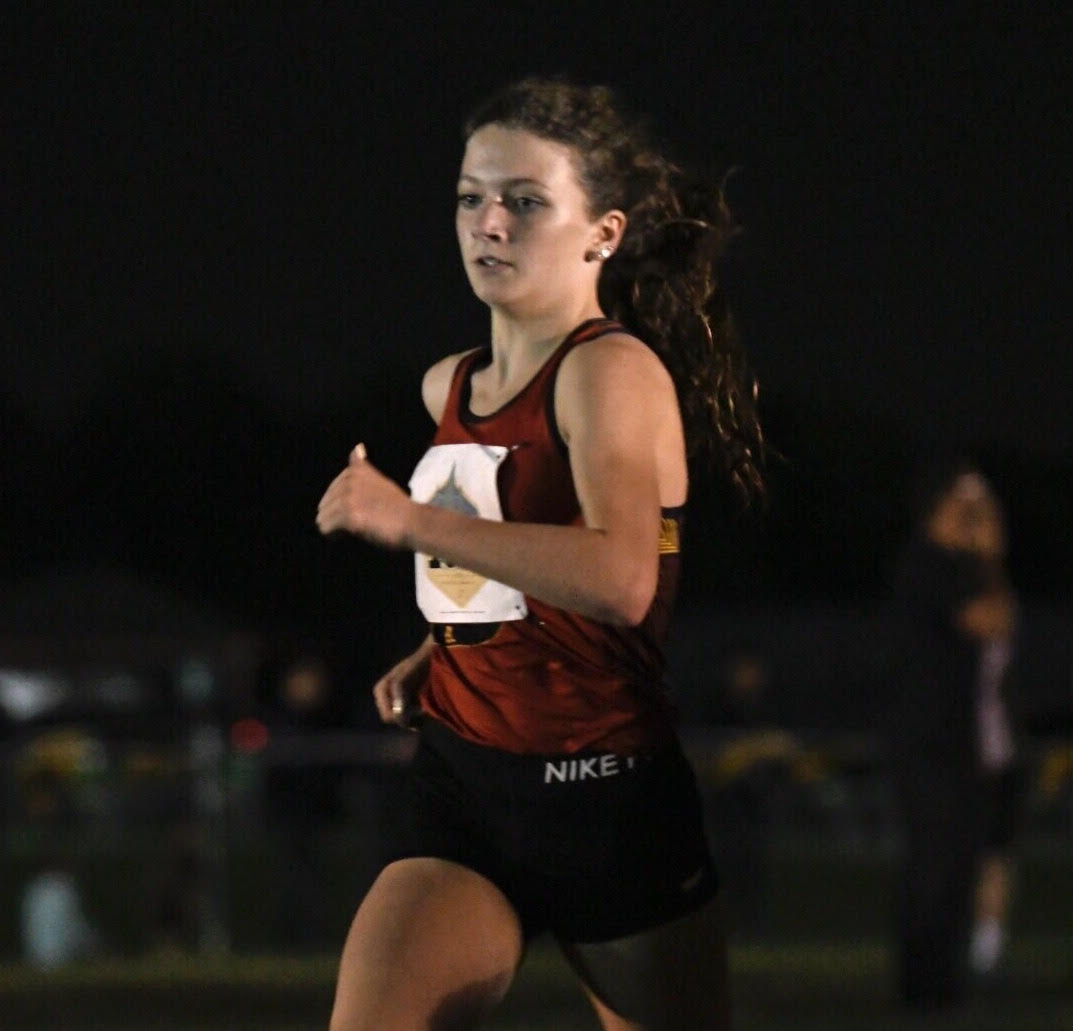 The wind in her hair, the redness forming on her face, the competition quickly trailing behind her. These are all types of obstacles that challenge cross country runner, Katrina Schlenker, but she said the support from her family, friends, and team is what keeps her going.

“When I run, I know that they’re behind me. That, and I have a whole team supporting me when I’m in a meet,” Schlenker said about her teammates.
Schlenker explained how the chemistry within her team is a huge aspect of her performance when it comes to running. She continued to elaborate on how not only does the support come from her team, but it also comes from everyone around her

“She’s a very coachable athlete,” said girls cross country coach Chad Hillman. “She’s done a great job of listening and trying to apply the things we tell her to do whether it’s in workouts or race. The listening part is one thing, but actually putting it into play is another, and she does both of those very well.”

Her athleticism is clearly beyond average, considering her personal best is 0:59 seconds for a 400 and 16:42 for three miles, a school record. Hillman states with that, and her drive and determination, she will be highly successful in running.

Another factor is her cooperation and the bond she has with her team. According to her coach and teammates, she puts effort into making friendships with the other girls and supports them back when they are competing in their own meets.

“She gets along great with her teammates. She blended in with, not only her freshman classmates but the older girls on the team, as well. They took to her right away and she does a very good job of mixing in and developing chemistry,” Hillman said.

Schlenker continued to explain the bond within her team and how important it is to be close with your teammates. She explains why she and the other girls have a special and close bond with one another.

“I feel like teammates are the ones who are closest with you, because they are the people that see you at your worst, and your best, and they help you through it all,” Schlenker said.
That being said, Anna Szuberla, another runner on the cross country team, explained how Schlenker is as a teammate and how she treats the other girls that are on the team. Schlenker is described as one of the loudest clappers and the one who is constantly cheering on other runners on and off her team.

This is another component that contributes to what makes Schlenker stand out as a true athlete. Not only does she portray a sportsmanlike attitude which results to her positive energy on the team, but her friendships outside of cross country affect her as a runner, as well. Schlenker goes into detail on how the support from her close friends helps her as a runner.

“She really does amaze me in the way how she is so kind hearted to everyone and her work ethic never stops. Running is put above almost everything else except her family and friends. She is a dedicated, hard-working and a truly amazing person who deserves all of the success,” Regnier said.

Schlenker also described how her relationship is like with her track running sister Sabrina Schlenker, a junior at Batavia High School. Although her sister runs track and she runs cross country, she explained how her older sister is always at all of her races cheering her on and pushing her to be her best.

“She is definitely an amazing supporter. She always comes to all my races and she really gets into it and pushes me and tries to help me through it because since she’s also a runner, she knows what I’m going through,” Schlenker said.

The relationships Schlenker has with the people around her are what supports her and makes her a true athlete. Athletes need much more than the physical talent to be successful. They must have the drive, work ethic, and required personality traits in order to thrive in whatever sport they are in, and according to Schlenker’s friends, teammates, and coaches, she possesses all of that.

It also requires endless backing from the people surrounding her, and they are a part of the reason why she is the athlete she is today.

As she takes her final steps across the finish line and hears everyone she loves screaming her name, it brings one of the greatest smiles across her face and pushes her to be her best.