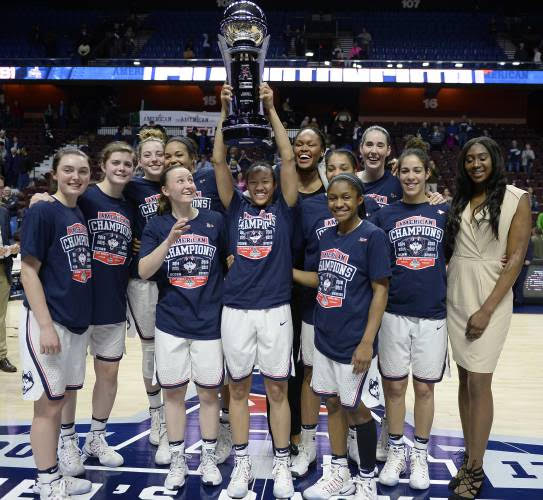 Many college basketball fans out there, like myself, have started to worry about the future of the country’s best Division I women’s basketball team, the UConn Huskies. The Huskies have been 1st in the American Athletic Conference for several years. Fans might worry about this because UConn has been so dominant for so long, but those last-second buzzer beater losses in overtime in consecutive Final Four semifinal games suggest one of the sports’ greatest dynasties has suddenly lost its edge. Now mind that UConn has lost only two games total in the past two seasons, winning all the other games. And UConn also still has arguably the best college coach in the Nation, Geno Auriemma, to help them succeed. When teams win four national championships in consecutive years, as the Huskies did from 2013-2016, when the smallest upsets happen, it magnifies everything. If you look back at last year’s season when Notre Dame’s Arike Ogunbowale hit the game-winning buzzer shot against UConn in the semifinals, many fans were shocked to see UConn lose. When asked if UConn would win a championship this year, this was one response “Even though UConn has been a Women’s Basketball powerhouse for many years, I think that someone will come out strong this year and take UConn’s throne just like Notre Dame did last year,” said Nicole McLaughlin, girls basketball team.

But look past those past two upsets and focus on the upcoming 2018-2019 season. For the first time since 2012, UConn might not start the season at No. 1. Instead, Notre Dame might likely start the season as strong as they ended it last year when they won the national championship. The Huskies might have had a nice chance at winning another championship this year if their 6-foot-6-inch center, Azura Stevens, returned for her senior year instead of deciding to go pro early. Her decision to join the WNBA this year combined with the loss of their best seniors, Gabby Williams and Kia Nurse to the WNBA, will possibly make UConn more vulnerable this year. However, the Huskies have a bigger problem right now. The conference. “It’s too weak to properly prepare the Huskies for the NCAA tournament.” said UConn senior John Adams. UConn needs to gain more overwhelming talent to make up for the ones they lost, as they did recently with superstar Breanna Stewart for four seasons. Stewart now plays for the Seattle Storm and was the first overall pick in the 2016 WNBA draft. After losing Stewart, UConn and their game collapsed. Now overall, UConn is still an amazing women’s basketball team, but they have lost in the semifinals ever since Stewart left.

Napheesa Collier and Katie Lou Samuelson are the rising seniors that are likely going to be making a very large leap towards helping UConn reclaim their title. With losing the senior superstars last year along with Azura Stevens, the Huskies will be in need of girls taking charge out there on the court.  If she can heal from her foot injury during the previous season, Crystal Dangerfield should help the team a great deal. The most logical option in who will replace Kia Nurse is Megan Walker, the top recruit coming into the season. She has the UConn talent; it’s just a matter of if she can play consistently in the fast paced game of college basketball and adjust quick enough to the changes, enough to contribute largely to the team. For the third time in three years, UConn will be bringing in the top player in the nation, and this year it’s freshman Christyn Williams. She’ll definitely be getting playing time early on. We’ll just hope she’s the same player that ESPN described: “Left-handed combo-guard manufactures, delivers off the dribble; attacks rim, draws contact, delivers at the charity stripe; developing deep threat game completes the package for next level impact.”  UConn will be needing her talent in the conference season.

UConn wins by laughable numbers at the beginning of the conference season, while other teams, including Notre Dame, improve through playing against tougher opponents each year. Something else is challenging UConn. The past two NCAA tournaments have shown recruits they don’t need to play for UConn to win a national championship. Playing for coach Geno Auriemma is still a huge accomplishment for young recruits, and the best players know that he can make them better players. As competitive as Auriemma is, there’s a nice chance this won’t be the last national championship the Huskies will win. If he can keep the teams skill levels up and keep all the players working the hardest on and off of that court, the UConn girls will have no trouble reclaiming their throne.