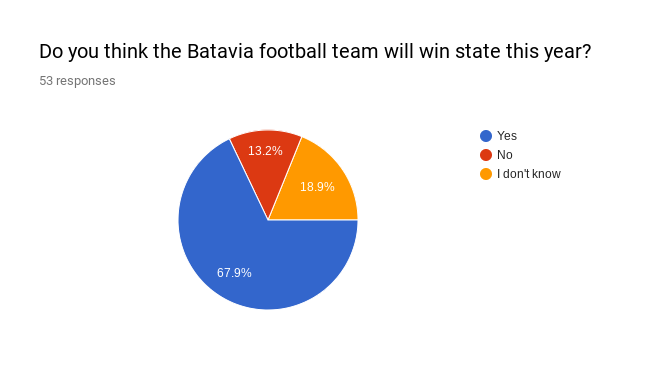 The Batavia football team, the reigning IHSA 7A state champs, are looking to go back to back this year. With a 10-0 record and fourth seed in the playoff bracket, their chances are high.

NBC sports, the Herald Review, and Maxpreps are just a few of the many news outlets that have the Batavia Bulldogs ranked No. 1 in this competitive 7A division. The Bulldogs are also ranked eighth in the entire state of Illinois and 269th in the nation. With an average of 417.9 yards per game offensively and a defense full of stars like Michael Jansey, who is committed to Northwestern, and Luke Weerts, who is committed to North Dakota State, how likely is it that Batavia will win state?

The answer to that question is very likely. In a game like football, success is determined by the work you put in and the chemistry the team has. Coach Theriault, who was an important part of the Bulldogs’ second place team in 2006 and is currently the freshman head coach and varsity assistant coach, has seen how much work the players put in the offseason and continue to put in the playoffs firsthand.

“We have a great team, so really the kind of focus for us is, as long as we keep doing our thing, and keep working hard and improving each week during the playoffs; I mean we got a great group of kids, who love each other and have fun, great group of coaches who work hard so as long as we are doing our thing, we feel good about winning each week, with all the work they put in and their chemistry,” Theriault said.

Another big part of football is preparation for the game and depth of the roster. The players and coaches are fully aware of that, though.

“Our scout offense did a phenomenal job all week, ran I think just as well as they did and it gave us a great look,” said junior linebacker Quinn Urwiler in an interview with CN100 earlier in the season.

This shows the preparation put into every game, mimicking the other team’s offense, but not just going through it half-speed, actually going game speed to let the defense prepare for what they are going to face.

When asked what aspect of the Bulldogs makes them so great, Coach Theriault could not just name one piece, but attributed the team’s success to the fact that they are not just great at one thing, but good at all things.

“If our defense is shutting down the run and they try to pass, we are good there too,”Theriault said.

This ability is not just seen there, but throughout the entire team. When one guy isn’t having a good game, another steps up.

Last year when the Bulldogs won state, many key players were in their senior year like Riley Cooper and Eric Peterson. When they left some people had doubts if the Bulldogs could be as successful as the previous season. Now the doubt has gone away for this season as they team has their eyes set on a second straight state titile but was redirected to next. Michael Jansey and Luke Weerts, key defensive leaders for the Bulldogs, are nearing their last highschool game along with many others. Coach Theriault weighed in on this.

“The biggest thing in this offseason is, I’m thinking is what did the kids do this past offseason?” Theriault said. “They worked their butts off, they came together as a team, and they built this culture and this excitement over what are they going to do next year.”

Critics of the Bulldogs will say they are overrated, and will lose in an upcoming game, but this team does not seem to be satisfied. The culture around Batavia High School’s football program seems like one that wants to reign for a long time. With plenty of talent going into the playoffs this season, the Bulldogs will not disappoint.