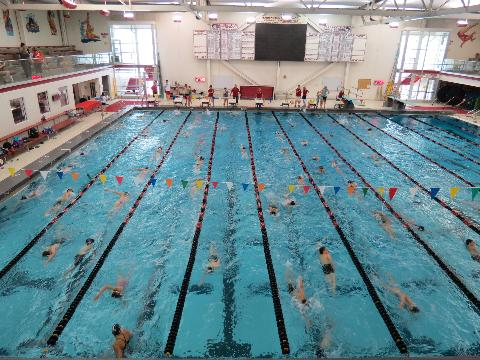 By Marissa Mirallegro and Ella Helfer

On Sat, Oct 27, the girls’ varsity swim team placed second and the girls JV swim team placed first at the six-team Upstate Eight Conference swim meet at West Chicago High School. The team said it was thrilled with the results after a long, hard-fought season.

“We did really well in conference and we needed to do good individually so we could do good as a team,” said Andrea Bullman, a JV swimmer. “We did great.”

The girls swim team was undefeated in the regular in dual meets and they earned either second or third in all invitationals.

“I got all the best times in the events I swam,” said Kayleigh Kuschewski.

“Well…I was feeling many things at once,” Liliana Larson said on her feelings before the meet. “I was feeling nervous, scared, excited, and weirdly older. Excited to show that I can really be a help to the team. And wanted to show everyone what I am able to do now compared to the beginning of the season. Scared and nervous because I really didn’t want to let down my team and bring them down. I also felt weirdly older because this was my first big meet and everything was so new and professional like! On the way to the meet, my dad played music in the car to calm me down which helped a ton.“

The meet started at one in the afternoon and lasted four hours at the West Chicago Pool. The girls were tired, but satisfied with the results of the meet.

“Well, I felt a bit down knowing that we didn’t win. But happy that we technically won.” Larson said. “Our varsity got second place and JV got first place. But they only count the Varsity part of the team to determine if your team won. Also, I felt a bit sad that the season was over and that I won’t be able to see the seniors again because it’s their last year and all. But I felt proud of not only myself but for the entire team.”

The girls swim team accomplished quite a bit this year with the results at the UEC meet, putting an exclamation point on their season.