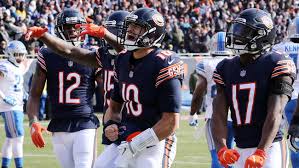 After four consecutive last-place finishes in the NFC North for the Chicago Bears, starting off this season 6-3 is looking really promising. Three big events occurred that led to a 6-3 record and a first-place standing in the NFC North

One of the first reasons is trading and signing linebacker Khalil Mack. He didn’t play against the struggling New York Jets and Buffalo Bills, but the Bears still won. On Oct. 14 against the Miami Dolphins, Mack suffered an ankle injury and wasn’t himself for the rest of the game and the Bears lost the game. Before the ankle injury in Mack’s first four games of the season, he had five sacks, four forced fumbles, was named defensive player of the month for September, and the Bears started 3-1 on the season.

Against the Miami Dolphins Mack tweaked his ankle the team and the Chicago Bears’ defense didn’t have a single sack that game. Backup Dolphins’ quarterback Brock Osweiler killed the Bears’ defense. The next game against the Patriots, fans could tell Khalil Mack wasn’t who he usually is from the start, the Bears’ defense only had one sack all game, and ended up losing by a touchdown.

The second reason for the Bears 5-3 record is quarterback Mitchell Trubisky. The second-year QB had 6 passing touchdowns and 354 yards against the Tampa Bay Buccaneers. This game gave Trubisky a big confidence boost and with Matt Nagy’s offense, Trubisky has had a good first eight games of the season.

One final reason is Bears’ 2018 draft picks LB Roquan Smith and defensive tackle Bilal Nichols have had a really good first eight games of the season. Roquan Smith has had many tackles and sacks same as Bilal. Nichols was drafted in the fifth round and so far he is looking like a steal for the Bears.