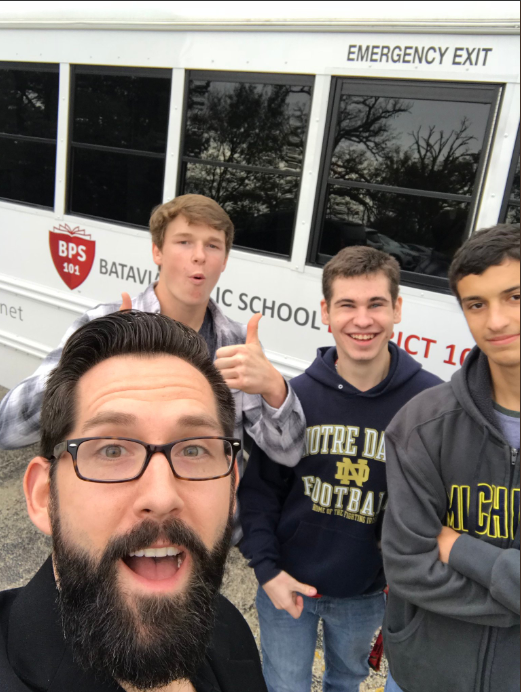 Multiple teachers at Batavia High School put in an effort to make sure students were able to participate directly in the midterm election on Nov. 6.

Thirty-five of the 100 seats in the U.S. Senate and all 435 seats in the House of Representatives were contested.

The Republican party widened its control of the Senate, while the Democratic party took control of the House, gaining between 35-40 seats in what would be the largest victory margin since the elections after Watergate in 1974.

Many teachers at BHS took part in the voting, and students who were 18 years old had a chance to, also.

Justin Allison, a history teacher at BHS, offered to take eligible BHS students to vote at the nearest voting location.

“Our school is a recognized partner of the IL Democracy School Initiative, which means we model and teach students civic learning standards,” said Allison.

Three students joined Allison in his trip to the polls. Allison was pleasantly surprised with that number.

“My idea to take the students came to me the Sunday before the election. So I only had three days to promote it,” Allison said. “I was very hopeful and optimistic. I was happy with what I got. Others verbalized to me that they did vote so that was good, it helped spread the word. It’s important for students to understand that their vote counts, to know why they are voting and what they’re voting for, and to get them to be engaged in the democratic process.”

Another BHS teacher who was able to get students involved in the election was history teacher Joseph Franz. He invited both candidates running for the House in Illinois’ 14th district, although then-candidate Lauren Underwood was the only one who responded. Underwood came and spoke to students on Oct. 15 in the BHS library and won her race, unseating Randy Hultgren.

He felt that students gained valuable knowledge from her visit.

“The students were able to listen and ask questions for the next US Representative of the 14th District. I think that this will help to break down the barrier between the elected official and the average citizen,” Franz said. “These politicians are regular people who have decided to run for office.  We should not be afraid to question or demand answers from our elected officials. In fact, we all need to realize that it is the duty of every citizen to be aware of current events and what their elected officials are doing.”

No matter their political opinions, students at BHS are able to feel informed and welcome about elections at BHS because of teachers like Mr. Franz and Mr. Allison who put in an effort to make sure they do.