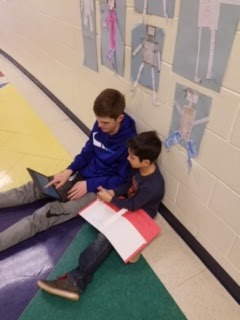 The Batavia After School Mentoring program is making strides as it enters its fourth year of existence. Amy Nelson founded the program because of struggles at some of the elementary schools.

“The Mentoring Program began several years ago as we saw a need for a  group of individuals to really build into elementary students going through tough challenges at our four Title Elementary schools,” Nelson said.

Mentoring meets every Wednesday from November to May. Each day, the students meet with their high school mentor and work on homework, reading, and goal-setting for 30 minutes. The remaining time is spent in the gym playing games. Nelson recognizes how important this time is for the mentors and students.

“The high school mentors not only help the elementary students academically with their homework and reading but most importantly they are another encouraging, supportive person who helps the student see their potential and be all that they can be,” Nelson said.

While this is the fourth year of the program, but only the third year at multiple schools. Hoover-Wood School was the only school to have the program in 2015. HWS P.E. teacher Greg Fink has overseen the program all four years.

“These students mostly live in subsidized housing and have many more responsibilities and obstacles than the average student,” Fink said. “They can really excel with the right role models and extra support.”

As for the kids, they love having someone to look up to that they get to see every week.

“Every week I look forward to seeing my mentor,” said Elijah Hernandez, a fifth-grader at HWS. “It’s good for me because I get my work done and I have fun.”

The students aren’t the only ones having fun. Several high schoolers said that they love the opportunity to make an impact in a kid’s life.

“The cool thing is I am just as excited to see them as they are to see me,” said Mathew Baines, a student at Batavia High School and second-year mentor.

Nelson said she has seen how much the program has impacted both mentor and student.

“It’s helped the student to see they are not alone,” Nelson said. “And it’s given the high schooler a chance to grow in character and be used to make someone’s world a little brighter, even for an hour that they are together!”

The numbers in students and mentors have grown by two to four mentors each year and Nelson believes that will continue.

“I’ve seen a jump in our numbers and I believe they will continue to grow as more mentors sign up at each school,” Nelson said,

Each of the four schools has a supervisor overseeing their school’s program. They make adjustments and format their program in their own way while still following a similar schedule as the others.

“The schools and the supervisors are recognizing what ‘fits’ their programs best, thus meeting the needs of the students in a more effective way,” Nelson said.

Although Nelson is happy with the direction of the mentoring program, she knows there is always room for improvement.