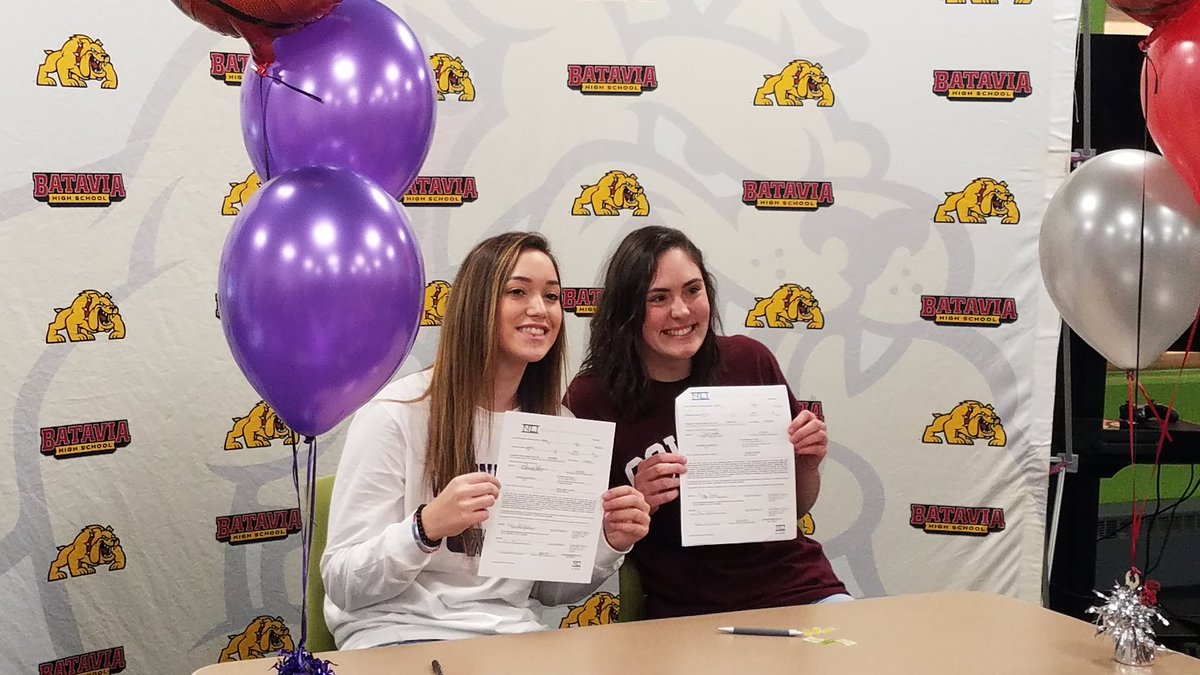 6 foot 1 center, Ava Sergio, announced she would become a Winona State Warrior next year. Sergio received the All conference and All-Area Honorable Mention Fox Valley during her career.

“I decided I wanted to commit to Winona State right away,” said Ava Sergio. ‘When picking a school you know which one feels like home. But since it was one of the first schools I saw I wanted to give that feeling time and look at other schools to be sure. But Winona is the only one that felt like home.”

She has made an unofficial visit and an official visit later on, where she spent the night with the team, getting to know her future teammates better.

“It was awesome to hang out with them and just be myself. They were very inviting and made me feel comfortable.” Said Sergio.

Sergio was averaging 9.5 points, 8 blocks, and 5 rebounds per game her junior year as a Batavia Bulldog. With a total of 293 points, 139 rebounds, and 54 blocks during last years season. She scored a career-high of 25 points on February 13th, 2018 against Bartlett, despite a few jammed fingers on her right hand.

“I will train harder than before and learn how to push myself even further. I also will listen to others more experienced and be very open-minded to get better.” Sergio said.

Recruitment for Sergio started her sophomore year but really picked up by the time she finished her last AAU season, going into her senior year. After that, coaches and recruiters kept her very busy, talking to her about her college basketball future and deciding where to go as well as being recruited.

“Ava will provide depth to our post and give us a shot-blocker and low post presence with an ability to score and pass from the high post as well,” said Winona State head coach, Scott Ballard. “She is a psychical player that plays with good basketball IQ.”

Sergio is looking forward to growing as a player, getting to know her teammates and to have a lot of fun playing basketball. There are many people in her life that have influenced Sergio in different ways, making her the player she is now.

“All of my coaches that I have head throughout my whole career have impacted me tremendously,” Sergio says. “They all have trained me to who I am today but someone that sticks out, my close friend and one on one trainer, is Blair Fox. She played division one basketball and has great advice if someone is looking to play college basketball. All of my coaches have made me physically and skillfully better, but she also made me mentally stronger to get to where I am.”

The second that letter of intent to Winona State University was signed was the second Ava Sergio realized her dream to play basketball for a college team came true.

“When I signed, I was full of excitement and joy. It all felt right and I couldn’t be happier.”

Geddy Rerko, 6 foot forward committed to a D1 school, Colgate University, soon to become a Raider in her next four years of college. Rerko was brought on the varsity team as a freshman in 2015. She has received the MVP award at the Marian Catholic Tournament her freshman year, Academic All-Conference and All-Conference Honorable Mention her sophomore and junior years.

Rerko made an unofficial and official visit to Colgate. She verbally committed in January 2018.

“I committed to Colgate because it is a very strong academic school and my education is something that I greatly value,” says Geddy Rerko. “The basketball program was a draw for me because the players were genuine and I really enjoyed the culture and environment of the team.”

Her junior year she was scoring an average of 7 points and 4.7 rebounds per game. She had a total of 208 points, 146 rebounds, and 37 steals last season. Rerko, so far, has a career-high of 21 points, 7 assists, and 1 rebound on January 9th, 2018 in her game against Larkin, and she has a free throw percentage of 82 from the line.

“Playing with other extremely skilled women will improve my game tremendously. There is always a learning curve and a period of growth and development as a freshman.  But with the coaching and support of the staff and players, I will improve and fit in well to the program. I will follow the example set by the returning players to learn and grow. I will get out of my comfort zone as a player to improve my skills.”

She first heard she was being recruited through her AAU coach the summer before her junior year. Although because of the NCAA rules she couldn’t receive direct messages from the coaching staff until September first of her junior year. Rerko’s coach told her there was a coach from Colgate that wanted to talk to her.

“I gave them a call and had really nice conversations with the coaches. It was the first time that the conversations seemed genuine and natural, which made the whole recruiting process with Colgate much more enjoyable.” Rerko says. I had conversations over the phone with other coaches which seemed forced and fake. When I talked with the coaches at Colgate, I felt none of those things.”

Rerko is looking forward to making memories and relationships that will last a lifetime that she says is “a unique experience that I am fortunate to have.” She is also looking forward to becoming a better basketball player and seeing her growth over her time at Colgate.

“My parents have helped me the most. They took me to practice and came to my games. They were there after big wins and losses.” Rerko said. “ My mom and dad have always been huge supporters and they always have my back. They pick me up when I feel down and they are truly amazing. I would not be what I am today without them. They made incredible sacrifices for me.”

Playing college basketball is a big change and will take countless amounts of hard work and practice to be successful.

“It will be a big adjustment, especially the pace of the game. I am really excited to be at the next level. All of the girls will be very talented and I think with practice and experience I will learn and adjust.