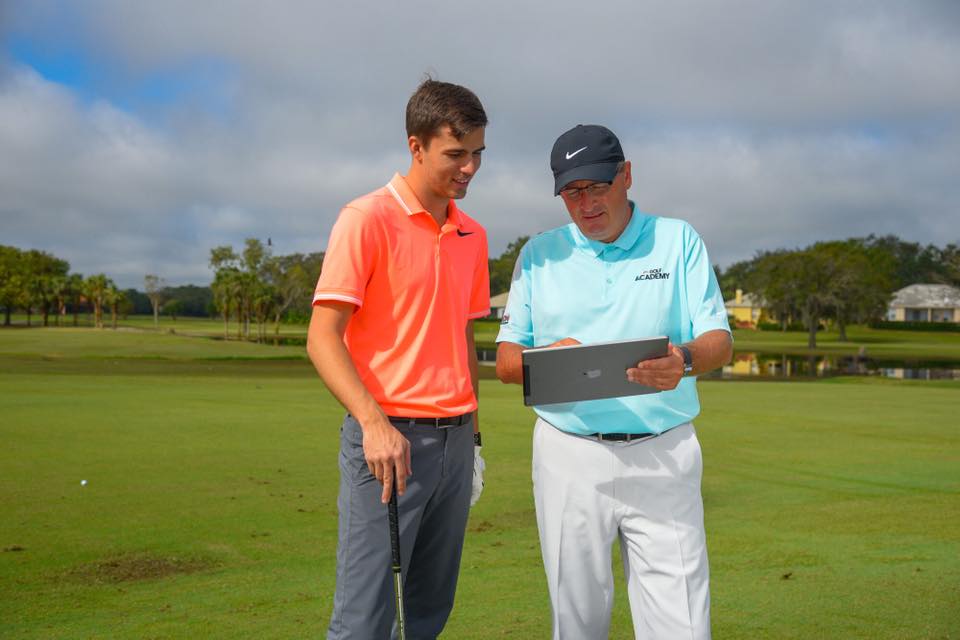 A person’s typical morning consists of waking up, maybe taking a shower, eating breakfast, and most likely heading to work. For PGA Professional David Impastato, it’s quite different. He wakes up, grabs a protein bar and some coffee, and takes off for work in his dark red Chevy Tahoe. Wherever he works that day, he is always focused on his busy schedule. If he’s not driving to work, he’s on a plane to Florida, where two of his Golf Channel Academies are located.

Impastato has been involved in the game for over 20 years. He’s been a club fitter, a head pro at multiple golf clubs, and currently teaches at his five facilities across the country. No matter what he is doing, or where he is, he has goals: to make the game more enjoyable and improve the game of high school golfers.

“If I can establish a common goal with my students, success will follow,” Impastato said. “More times than not, that goal starts with making the game enjoyable.”

When he arrives at work, he isn’t sitting down at a desk and taking calls all day. No. Impastato walks into a golfer’s dream: rooms full of golf simulators that are packed with technology telling golfers whatever they want to know and two putting greens allowing a golfer to work on whatever they desire. Banners throughout the building read: Impastato Academy and Golf Channel Academy. It’s one of three Academies in the Chicago-area, with the other two located at the Campana Building off Randall Road and the other at Mooseheart Village in Batavia.

“When the Campana location originally opened, it was a huge success, so I figured why not open a few more?” Impastato said.

Success is an understatement, his students love spending hours at a time at the academies.

“David has done an awesome job providing myself and other juniors opportunities by allowing us to spend time at his facilities,” said Charlie Burke, a longtime student of Impastato.

Impastato’s other two academies are located in Florida at Gateway Country Club in Fort Myers, and at Heron Bay Golf Club in Coral Springs. All five locations are supported by NBC’s Golf Channel.

Jerry Smith, a former member on the PGA Tour Champions, praised Impastato while on the Golf Channel: “David’s experience and teaching knowledge would be a great benefit for golfers of all skill levels. Highly recommend for juniors wanting to elevate their game.”

Smith isn’t the only one with high praise for Impastato.

“When David asked me about going in with him at the Campana location, I didn’t hesitate to say yes,” said Fellow PGA Teaching Professional Rich Flores, former Batavia High School golf coach. “He has done so much for the golf world and I knew I was getting a great partner.”

Flores is right, Impastato has done great work in the golf world, as his many awards show.

Golf Digest Magazine has recognized Impasatao by placing him tenth in its annual “The Best Teachers In Your State 2016-17” list. In 2017, Golf Channel named Impastato one of its top 20 instructors. The PGA of America awarded Impastato the 2003 Merchandiser of the year and the 2006 and 2009 Growing the Game award.

When Impastato sees his students, he does more than teaching just golf. When a student walks in, Impasto makes sure to ask them how school is going and how life is going. He tells them if they ever need anything, they just have to ask.

“To me, I’m not just trying to only be their golf coach. I want to be a mentor or role model for the kids,” Impastato said. “If I can get to know each one of my students and build a strong relationship, then it will only benefit them more.”

His efforts don’t go unnoticed by his students, as they said that they love Impastato’s approach to coaching.

“I have gained so much more than a better golf swing from David,” said Dylan Kroll, a member of the BHS golf team. “He has taught me important life lessons and the ability to make those around me better by offering help or allowing others to help me. He is a great mentor.”

Impastato plans on hosting a number of junior golf camps this winter at his new indoor location located at the corner of Fabyan and Kirk Road in Batavia. He wants to continue getting kids involved in golf at a young age.

“The most important thing about being a PGA Professional is making sure the game grows and getting as many people involved in Golf as possible,” said Impastato. “If I get more kids to play golf, great. But if I can get them, or anyone for that matter, to truly enjoy themselves while playing golf, then I feel accomplished. The game needs to grow, and I want to be a leader in that process.”