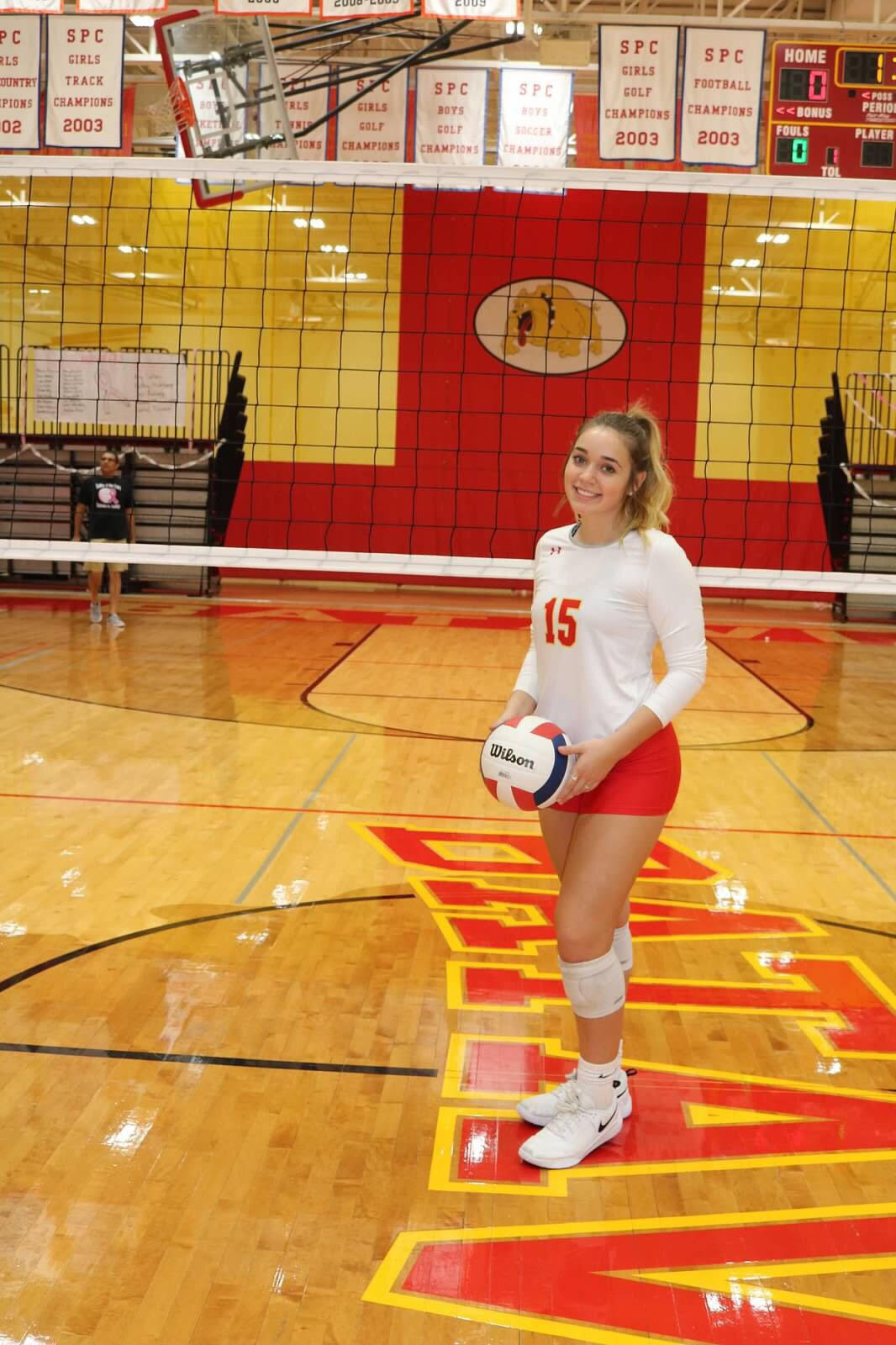 By Lily McLaughlin and Renee Forsyth

The score is 18-23, with the Geneva volleyball team taking the lead at her home court. As the play continues, Sam Juarez is set up to hit the ball. As she flies out of nowhere, she smacks down the ball to an empty spot on the opponent’s side, now making the score 19-23. Juarez was praised for her effort on the court by her teammates and coaches, as well as spectators watching the exciting match.

Juarez is a varsity volleyball player at Batavia High School. She has won several championships and awards throughout her volleyball career, both during high school and club season. She made the Under Armor All-American Match Watch List for the class of 2019, has won several national titles with her club team and was player of the year in 2016 for the Batavia volleyball program. Teammates and coaches say that Juarez has grown as a person, student, and volleyball player throughout all of her years at the high school.

“She pretty much will talk to anybody, and she will work with everybody,” said Coach Lori Trippi-Payne, the varsity volleyball head coach at BHS. “She’s walking away from this program knowing that it’s more than just volleyball. There’s a lot to it; we’re one big program and I think that she’s seeing that.”

Juarez’s high school volleyball journey started her freshman year playing on varsity as a defensive specialist and outside hitter. That year she had a total of 78 sets, 165 digs, 315 serve receive passes and 51 kills. She was also ranked top 15 in the country in her position as a freshman.

Juarez committed to play for the Northern Illinois Huskies, where she hopes to learn more about pursuing her dream of becoming a homicide detective. Juarez verbally committed as a sophomore but just recently made it official.

Starting out as early as 2008, Juarez was already involved in Batavia volleyball and was always around to watch varsity games and cheer them on. Many different people encouraged and continue to encourage her love for the sport. Evidently, she has been playing volleyball for 11 years. She started when she was six years old and began playing competitively at age nine.

“My aunt played volleyball through her youth and into college, so after college, she decided to coach high school and now she coaches at a college,” Juarez said. “My aunt was the person who really got me into playing volleyball. I always went to her high school camps and once she realized I had real talent, she told my mom to get me into the sport competitively. From there on I completely fell in love with the game. My cousin also played volleyball from middle school to college, so growing up around the game helped me start playing it.”

Teammates and longtime friends describe her as someone they can count on when they are in trouble on and off the court. She has made some of her closest friends through volleyball during high school, middle school, and her Fusion club team.

“Sam is one of my closest friends on and off the court,” said varsity player and senior Olivia Greco. “She really helped me a lot this year become a better player. Whenever I would shank a ball or be overwhelmed on defense I could always look over to her to calm me down, and get me out of my own head.”

A close friend of Juarez and one of this varsity season’s co-captains, Maddy Boyer, has been on the varsity team for the past three years. She has also been on a team with her for three years. Juarez influenced Boyer’s attitude and views of the game in many different ways.

“Sam has helped me grow as a player and a person by teaching me how to be calm on the court and not be so uptight,” Boyer said. “I can always look to her if I am in a tight situation on the court.”

“Sam and I are very good friends outside of volleyball,” said Robinson. “Sam has helped me become a better player and taught me to be fearless on the court, and she has also taught me to deal with hard times on and off the court.”

Coaches and teammates say that having these incredible traits will definitely help her with her experience in college, as well as in her future beyond college.

“There has definitely been doubts throughout my career. There were times where I would get frustrated with myself and the game and didn’t think I was good enough to continue,” Juarez said. “But I was able to take all of the hate and doubt and turn it into determination to make me work harder.”