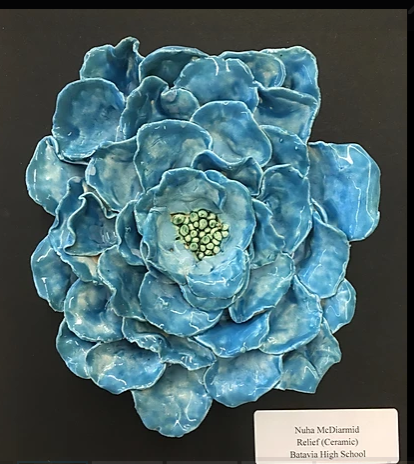 Interviewer: How long have you been interested in art?

Nuha: “I’ve been drawing since I was about four, but I’ve been interested in clay and sculpting, and 3D art since about eighth grade. I started developing my skills in 3D art during my sophomore year.”

Interviewer: So what got you into art in the first place?

Nuha: “I spent a lot of time alone as a kid because my parents were always in meetings, and they would have to bring me to the meetings so they would just kind of give me a pen and paper so I just kind of drew all the time.”

Interviewer: Did you draw yourself some friends?

Nuha: “I drew imaginary friends when I was four. Her name was Kirfleen.”

Interviewer: Kirfleen? How do you spell that?

Interviewer: So would that piece be your most meaningful one? Or do you have another?

Nuha: “The piece that means the most to me isn’t that good but it was one of the first busts I ever did. It was of my grandma and I put Arabic writing on her shoulders. It was made when I first started developing my skills and it meant a lot to me.”

Interviewer: What piece would you say took you the longest?

Interviewer: So overall, how long did it take you?

Interviewer: So with all this, would you like to continue art after high school?

Nuha: “I would hope to continue art but I wouldn’t make it my profession. I wanted to be an artist or an animator for a really long time but I just kind of shifted past that.”

Nuha: “A little more than a hobby but less than a life career.”