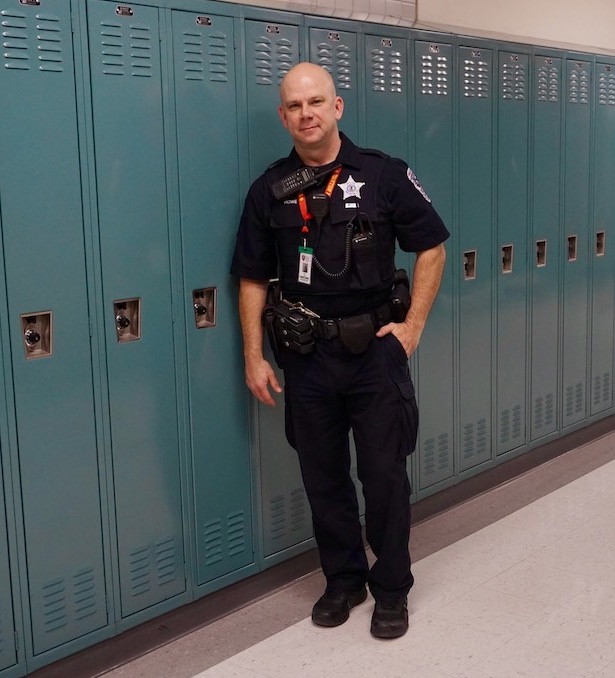 Officer Howe is an SRO, which is a school resource officer. His daily workdays are unpredictable and sometimes hectic here at the high school, but he enjoys every day he is here. Officer Howe loves being able to create connections with the staff and students here at Batavia and is excited to be able to make more as the years go on. Officer Howe is able to connect with the students in a helpful and trusting manner due to his training and study of family and individual development. His degree allowed him to study as well in psychology and mental illnesses, allowing him to relate and react appropriately in specific situations. Officer Howe keeps the Batavia High school safer and more accepting.

Madi: Why did you become an SRO?

Officer Howe: “I’ve always kind of had an interest in an SRO from when I first started. Actually in my interview to become a police officer, that was one of the areas I had hoped to achieve because I feel you can make the greatest impact when you’re around the kids daily instead of being on patrol where maybe you respond to a call for a half-hour or hour. You don’t get to make those connections. Here, being in the school setting you’re able to, I think, have the opportunity to have those connections and talk with the kids… Before I was the high school resource officer about ten years ago I was the middle school resource officer when they had one at Rotolo.

Madi: Which did you like better: the high school or middle school?

Officer Howe: “High school, I think. It’s a tough question. I initially said high school but now ten years later I still had contact with some of the kids from middle school and so not only do I think as an officer to make an impact but you guys, the students, have an impact on me so it goes both ways and I’m going to say high school right now because I’ve been in this spot a little bit longer and I’ve been able to make more connections we’ll say. I’ll say high school.”

Madi: Do you ever get tired of kids and being in charge?

Officer Howe: “I’m not going to lie and say it’s roses and everything’s great all the time because it certainly comes with I take a lot of it home with me. Although it’s a job you can’t just turn off when you walk out the door, okay my shifts over I’m done. I have a lot of contact with assistant principles, deans, principles, and people at the central office. It doesn’t go away and more recently with the things that have happened, it took a great toll on me. It was really nice over Christmas and New Years break, I took the family out to a cabin in the woods. There were two cabins on 400 acres and I got to reset myself and it’s been awesome. It’s awesome. I love it. There are times it wears you down like any job but then you just have to find what makes you happy and your peace and how to center yourself.  It can be tiring and it can be draining but at the same time, it’s super rewarding. It’s well worth any kind of negative thing that goes along with it the reward is so much greater. It’s a great job.”

Madi: What traits did you have to acquire to be an SRO other than a patrol officer?

Officer Howe: “I went to school. My degree is in family and individual development and it’s really kind of exposed me… I took a lot of psychology, a lot of health classes, and I learned a lot about people like different mental illnesses and health concerns like those things. I think it has helped me have a better understanding of people and how to talk to people, how to approach people. What helped me is my patience and understanding. I’ve been exposed to a lot of things whether it’s my own family or the job that has given me a wide-ranging global outlook on things that have helped. The biggest thing being able to accept people for who they are as well as not prejudging them for whatever background they have. Having good listening skills here and internalizing, processing that I think those are some of the good skills I have acquired. And being in the school setting and be their long term is great to be able to collaborate with people. I get to talk to the dean and to the principal. And kind of get a greater picture of what’s going on in this person’s life and to discuss maybe what a consequence could be how you could better help and serve then.”

Madi: What does your daily life here look like?

Officer Howe: “There are days that can be quiet and we don’t have a lot students in need sometimes. That allows me to go out and walk the halls or go in classes and chat with people on my own and make those connections. Then, there are days that are crazy and hectic. Today is a day where before I even got into the school parking lot I had a student who was on a traffic stop going outside of school, and that pulled into an emergency that I left the school and went into a students house it’s really kinda variable on the day but its a great place.”