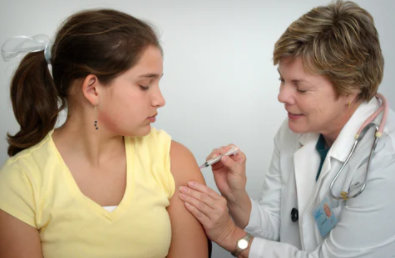 While walking in the halls during passing periods, students shouldn’t have to worry about who does and doesn’t have their polio or measles vaccine. At BHS during the 2018-2019 school year, 20 kids weren’t vaccinated according to Illinois school records. By allowing students to be unvaccinated and still attend school, it’s unsafe for students who have the proper vaccines. Even if students have the proper vaccinations they can still get the measles if exposed to it. By allowing unvaccinated students to come to school we are risking the safety of students and teachers.

In 2019, there was a large measles outbreak in Washington state that forced more than 800 students to miss school for several weeks. Not only is letting unvaccinated kids be sent to schools unsafe but it’s also imposed on the education of kids, which we have now seen in Washington. The Seattle school system decided to take action and as of Jan. 8, 2020, all students must have their vaccines or they are unable to attend classes.

“All we want is for all people in our schools to be able to come into school and not worry about getting a disease that is a vaccine-preventable disease,” said Sami Hoag, the health services manager for the school district.

A religious exemption is one of the only ways schools in Illinois will allow its students to be unvaccinated. Some people say that their religion doesn’t allow them to be vaccinated. This isn’t true for most cases because very few religions in the U.S. have expressed that they don’t believe in vaccinations. There have only been two religions to come out and say that they are against vaccinations; these are Christian Science and the Dutch Reformed Church. Studies by the American Association of Pediatrics show that many people are lying about how their religion prevents them from getting vaccinated. American Academy of Pediatrics shows that throughout the years, religious exemptions have increased while the number of people who claim to be a part of religion has decreased. States that don’t let people use personal reasons to get out of vaccinations have four times more people claim to have a religious reason to not vaccinate their child compared to states that do allow personal reasons to get out of vaccines.

Vaccinations are something important that should not be overlooked by schools. The safety of vaccinated students and teachers are put at risk when unvaccinated students are allowed into schools. It’s unfair to students with proper vaccinations to have to walk around school fearing whether there could be possible outbreaks of diseases that can be prevented. All Illinois schools, including Batavia High School, should require 100 percent of its students to be vaccinated.