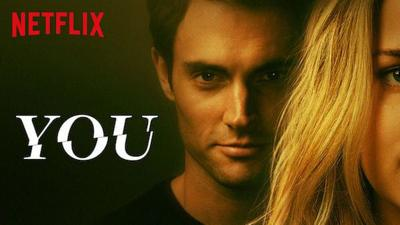 In December of 2018, Netflix came out with its first season of You. You was one of Netflix’s more popular shows and had over 43 million viewers in the first season alone. Most viewers enjoyed it and it has a 93 percent on Rotten Tomatoes. You combines mystery, horror, and romance, which makes it so different from other shows on Netflix. It was nominated for Best Streaming Horror and Thrilling Series by Saturn Awards.

The show takes place in present-day New York and focuses’ on what seems to be average New Yorkers.  The show follows a man named Joe Goldberg (Penn Badgley) along with his love interest Genevieve Beck (Elizabeth Lail). Very frequently Beck’s friends are in the show as well; these friends are Peach Salinger (Shay Mitchell), Lynn Leiser (Nicole Kang), and Annika Atwater (Kathrynn Gallagher).

After Joe meets Beck for the first time at a bookstore, Joe immediately falls in love and convinces himself that they are meant to be. Joe quickly becomes completely obsessive over Beck and does some extremely unsafe and illegal things to make himself the main priority in her life. Although Beck is mostly oblivious to these things, her friends, specifically Peach, catch on extremely quickly.

Although the majority of the show is well thought out and interesting, at times the season feels like it’s dragging on and actions seem unnecessary. The show has ten 40-minute episodes which can also make the show feel like it’s excessively long when it’s filled with things that fell unnecessary. Despite these things, the show is still worth watching.

Overall You is a great show that can be agreed on by many of the viewers and is one of Netflix’s more popular shows because it’s so good. The show is written, directed and acted extremely well which is what makes it so great. I would rate it a 9/10 and would recommend it to anyone looking for a good show.