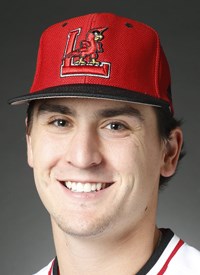 By Ryan Ingold and Kyle Neibch

Over the years, Batavia has produced great athletes from Division-I caliber players to very good Division-III players. Have you ever wondered how those athletes are doing in college now, what’s the role on their team, what’s the school like, and what their future holds for them?

The Spectator decided to interview two of the finest athletes to come through Batavia High School, Northwestern football player Michael Jansey, Jr. and University of Louisville pitcher Glenn Albanese, Jr. We asked them questions about how it is going at their respective schools, what they are looking forward to this upcoming season, and what some of their goals are.

Let’s start with Jansey Jr. He is attending Northwestern University right now and is going into his sophomore year. Jansey Jr. still has all four years left of eligibility because he was redshirted last season. He did see some action last year on special teams, along with a couple reps at his primary position, outside linebacker.

Jansey Jr. played three years of varsity football. Coming up as a sophomore is a big leap but it wasn’t insurmountable to “Mr. Do it all” Jansey Jr. From playing linebacker to running back and even sometimes being put at the safety position, he and the coaches knew exactly what he was capable of doing.

One of his biggest accomplishments came when he was a Junior. Jansey Jr. helped the Bulldogs win a state title in 2017. After finishing the season 14-1 and beating Lake Zurich in the state championship game, Jansey Jr. still felt like he had much to prove coming back for his senior year.

Jansey’s senior season was no let down that’s for sure. He led the team to a perfect 9-0 regular season and won the first three games of the postseason before facing LaGrange Park (Nazareth) in the semi-finals. They finished the season going 13-1 and it’s safe to say Jansey Jr. could do it all for them. From scoring touchdowns to making big tackles and sacks, Jansey Jr. was all over the field.

We asked Jansey Jr. a few questions about his experiences at Northwestern, and here are his answers:

What is it like playing Division 1 football compared to high school football?

Jansey Jr: “Division-I football is more competitive and more of a commitment than high school football. Those two factors make you engage more in the sport which increases your love for the game.”

What is your favorite part about Northwestern University?

Jansey Jr: “My favorite part of Northwestern is the people and the location. The campus is beautiful being on the lake and my group of people are amazing individuals.”

What has been the most difficult thing about college?

Jansey Jr: “The most difficult thing about college is managing football along with school, social life, and e-commerce. It’s hard to focus on all of them at once so you have to choose what’s most important and that is football and school. It has also been difficult over the year not being in a spot on the depth chart where I want to be, but 2020 is the year where things change.”

What is the best perk of being on the Northwestern football team?

Jansey Jr: “The biggest perk of being on the team is having a group of brothers that have your back along with coaches and the connections it brings.”

What are your goals for your 2020 season?

Jansey Jr: “My hopes for my 2020 season is to become a more responsible player, control the controllables, take a few peoples spots, and earn more respect”.

Next up is Glenn Albanese Jr.. Standing at six foot six inches tall he can bring the heat. Being ranked top 10 in the state of Illinois is a tough thing to do along with throwing a fastball 90 plus miles per hour.

Albanese Jr. played baseball and football here at Batavia. After excelling in both the sports he chose baseball would be the best fit for him in college.

Once he arrived on campus Albanese Jr. got some bad news, he would have to receive Tommy John surgery on his throwing arm. This surgery took him out of his whole freshman season and the first half of his sophomore season.

Although he was out for half of his sophomore year he was still able to make eight appearances on the mound for the Cardinals. Putting up a 1-1 record in his two starts and just letting up on average 3.72 runs in a total of 9.2 innings pitched the future of Albanese Jr. and the Cardinals is looking very bright.

What is it like playing Division 1 Baseball compared to High School Baseball?

Albanese: “High division 1 baseball is a completely different game than high school. When most people compare the two they mention the speed of the game, which is true. What people often overlook is the learning aspect of the game. In high school, players can get away with just running out and throwing strikes, getting base hits, etc. at the college level there’s much more to the game. You need to first be a student of the game and understand why certain plays occur throughout a game which will enable the team to grind out more wins in low scoring games. These are often situational things like knowing when to bunt late in games, understanding when teams are going to try and steal a base, and so on”.

What is your favorite part about The University of Louisville?

Albanese: “My favorite part about Louisville baseball is the camaraderie with teammates. All off-season we do these crazy workouts that build trust and make each other work until we’re sick before the sun comes up. These aren’t fun in the moment but during the course of a season, we realize why we train so hard. It brings everyone together and helps us get through the ups and downs of a season”.

What is the most difficult thing about college?

Albanese: “The most difficult thing was having Tommy John surgery. It took me out if my freshman season and the first half of sophomore season. Having two hours of rehab a day with workouts after was difficult because I had to balance this time with the team activities. I still got to be with the team in the dugout and help out where I can but I had to get my own stuff done first”.

What is the biggest perk of being on the Louisville baseball team?

Albanese: “The biggest perk of being on this team is the friendships and networks that I’ve built over the years. The charter flights, gear, and meals are all nice but we all earn every bit of that during the off-season and season. This program and coaching staff is excellent at not spoiling the players and keeping that blue-collar mentality. Working day in and day out with one another for years creates a bond that is unmatched. Living, eating, studying, and everything in between is spent with my teammates which is very valuable. When older players leave and come back, it feels like your family just came to town for a visit. Our training staff and resources set us up to have no other option but to succeed”.

What are your goals for your 2020 season?

Albanese: “My hopes for the 2020 season are the same as they were last year- win a national title. Each year before the season we all fill out goal sheets to write our own personal statements on what we are going to accomplish this season. Nobody writes down be an All-American, be a high draft pick, etc. it is always something tailored towards being the best group and team to come through the program. My goals for this year are to end the year with a win, and help younger teammates understand the importance and depth of doing the little things the right way because those add up and make all the difference”.