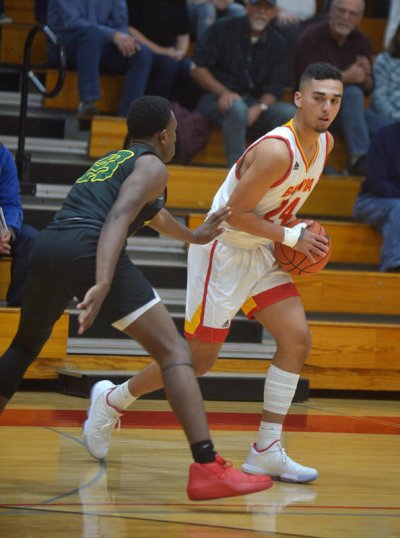 By Ryan Ingold and Kyle Neibch

Batavia Boys Basketball Coach Jim Nazos has had the opportunity to coach some very good basketball players during his long coaching career, but there is one player that really stands out: Jayden Johnson.

With the whole town of Batavia packed into the gym on a Friday night against the Saints from St. Charles East, Johnson who was then a sophomore knocked down what he calls the “shot of his career.” With five seconds left on the clock, the Bulldogs had to get a shot up, and they put the game in the hands of their star Johnson. From eight feet beyond the three-point arc, Johnson hit the three for the win.

“Watching the students running at me was just a surreal moment,” Johnson said.

This is where he said it all started to click for the four-year starter.

“He loves the game of basketball and is someone who spends countless numbers of hours in the gym,” Nazos said. “Jayden used to be just a shooter. He is someone now who can post up inside and take the ball to the basket and finish.”

Johnson has taken a lot of steps through his high school career. Obviously his scoring has improved over the years, but looking beyond that, Johnson had found a more important step to take than just that.

“I think the improvement that I have shown is huge and first starts with my body,” Johnson said. “I’ve worked with Bryce and Scott at Legacy Performance to help me. Freshman and sophomore year, I was just a shooter and I had a lot more weight on me. I was a lot slower and couldn’t do anything else other than shoot. Now, I am able to read whoever is guarding me and take advantage of what they give me. I am able to get to spots a lot faster and score.”

Something that has helped with Johnson’s success was the chemistry he had with his friend and teammate Tyler Cooper.

Being friends and teammates since the fifth grade, Cooper always knew there was great potential in Johnson.

There were no strides lost between the two while Johnson was up on varsity his freshman and sophomore year and Cooper was playing with his respective age group.

Cooper and Johnson were able to reunite their junior years when Cooper was brought up to the varsity team and they have clicked through their senior year, as well.

One thing about Johnson that helps his teammates love him is his personality. Cooper describes it as “goofy and easy going no matter what is going on.”  One other characteristic that will be missed is his winning mentality. His teammates said that Johnson does whatever it takes to win games and that is what has turned him into a star at Batavia High School.

During his fourth and final year on varsity, Johnson brought “Experience, and passion for the game, and the ability to score in different ways. He also brings being a role model and a good person to younger players.” Said Nazos

Johnson has been playing basketball ever since he was little, one of his life long dreams has been to go play basketball professionally in the CBA just like his father did.

Johnson has left quite a legacy at Batavia, one that will never be forgotten. Johnson has put himself in some elite company with Corey Williams, Nick Fruendt, and David Bryant – being some of the only players in Batavia Basketball history to start all four years on varsity. To top it off Johnson was selected All-Conference in his sophomore, junior, and senior years.

“I will always remember him as an endless worker,” Coach Nazos said, “and a first-class person first.”