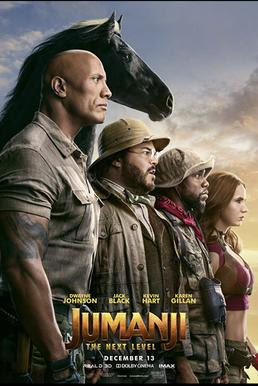 The non-stop humor and adventure keeps the audience on the edge of their seats while watching Jumanji 3, The Next Level

Just like the other Jumanji movies, this movie includes action and excitement, nail-biting moments, and life lessons. The Next Level is filled with humor and irony, along with adventure and hope. This movie was the best Jumanji movie out of all three because of the number of times I laughed and the amount of excitement and nervousness I had while watching.

Spencer, Martha, Bethany, and Fridge are all freshmen at different colleges. Returning back to their hometown for Christmas break where they grew up together, Spencer stays with his grandfather, Eddie. While reminiscing through the basement one morning, Spencer finds the video game that almost ruined his and Martha, Bethany, and Fridge’s life years ago- Jumanji. Meanwhile, his three friends are waiting for Spencer for breakfast when they realize that something is wrong.

Rushing back to Spencer’s house, they hear the music. They hesitate, knowing what happened, and follow the noise to the basement. Spencer is missing but the video game is sitting there waiting to suck them into the game, as well. Before they know it, they are in the game. This dangerous video game did not just bring the three college students in, but it also brought Grandfather Eddie and his old friend, Milo. Panicking and knowing they only have three lives until it’s game over, they know they need to find Spencer immediately before it’s too late.

There were times in the movie where I would bite my nails because of the amount of nervousness I had while watching. All six of the main characters took risks that I would never take. The amount of action and adventure in this movie is incredible. Even though Jumanji 3 is an action-filled, nail-biting movie, there were life lessons throughout the whole story. For example, one of the life lessons was “never leave someone behind” or “always stick together”.

Along with all of that, the humor in this movie made me laugh out loud. Grandfather Eddie, or Danny Devito, and Milo, or Danny Glover, were two of the characters in the movie that made the audience laugh and smile with Eddie’s rude humor and Milo’s dad jokes. Along with humor, the movie was overflowing with action and adventure. There were nail-biting and anxious moments when I was nervous that something was not going to go the way I hoped. The mix of humor, action and adventure, and tension in this movie made the excitement ten times bigger.