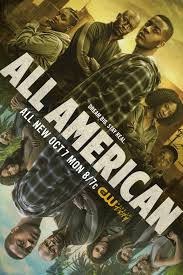 Recap of All American Season one: Spencer James is faced with a big choice in his life, whether to take his football talents to Beverly Hills and have an above average life-style or stay in his real home which is in Crenshaw where gangs roam the streets. After discussing with his mom he decides that Beverly Hills would be the best fit for his future and keep him the most safe.

I highly recommend watching season two of All American if you love a good sports show along with real life problems kids face in high school. All American is based on a true story. People who watch the Netflix series will see how hard it is to live in two different towns and try to make it work. It brings out a lot of good teaching points such as depression and being there for your friends. This show will have you on the edge of your seat and make you want to binge watch the whole series in one day.

Personally, after watching season one I could not wait for season two to come out. And when it finally came out it sure lived up to all the hype. It is by far one of my favorite Netflix shows and that also goes for many people around the world.

Season two: The Beverly Hill Eagles have just come off of a season where they accomplished many things, like winning the state championship. But with many distractions such as players partying too much and the coach trying to figure out his life after his wife left him, the team is struggling.

When the players finally decide they need to start working harder, the coach Baker follows in their steps and the team is on a roll again.

But off the field there are much bigger problems.

Spencer’s girlfriend, Leila, is showing signs of depression. With her dad on a tour for his music she is stuck back in Beverly Hills alone. Spencer tries to help her out but she claims that she is totally fine even though everyone knows there is something bothering her. Spencer and his friend Oliva call up Leila’s dad to get him home so he can help her out. Leila did not like that Spencer decided to call her dad so she yells at him and breaks up with him. Leila’s dad finds a rehab center for her to attend.

This isn’t the only person Spencer is losing in his life at this point. Spencer’s dad Corey returned to Crenshaw to spend the much lost time with his family. But when Corey gets a call saying that he only has so much more time to live because of his cancer, he leaves again. Spencer and the rest of his family go out to try to find him. When they find him and a house in the middle of the woods, they persuade him to come back to Crenshaw with them. Just before they leave, Corey dies and Spencer is crushed.

After the tragic loss of his father, Spencer quits football to focus on making enough money for college. But when one of his enemies comes back to Crenshaw, he has to turn his attention to him. Tyrone who was supposed to be in jail gets bailed out and leaves Spencer worrying about his friend Coop who tried to put Tyrone in jail.