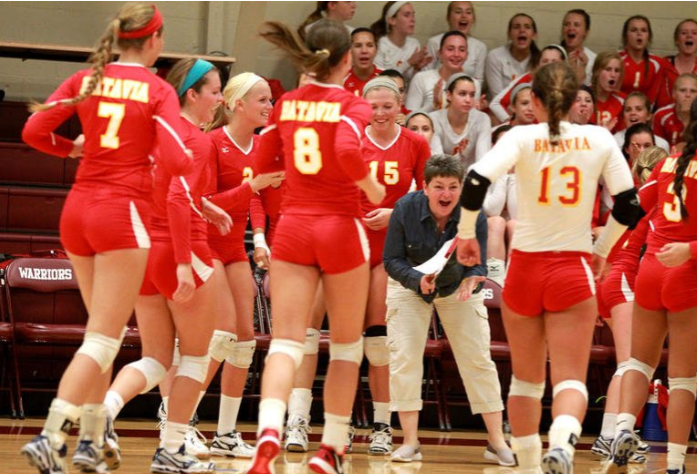 Lori Trippi-Payne coached for 33 years as a Batavia High School varsity volleyball coach, but after this last season of coaching, she retired. Her decision to retire made many volleyball players upset, especially those who had the opportunity to play on her team. Through her years of coaching, Trippi-Payne has made many volleyball players feel special and proud. She has nicknames for almost all of the players and makes sure they all feel like they can talk to her. Trippi-Payne has helped many players get better and better, but unfortunately, those seasons of winning and coaching have come to an end.

“I really wanted to coach one more year for the 2019 season for a variety of reasons, but mostly because I wanted to have everything in place for a smooth transition. I wanted to graduate with this senior group that I had known since they were very young and I was excited about your freshmen group… and (I) wanted to have the opportunity to get to know all of you better/coach you in our program,” Trippi-Payne said.

Trippi-Payne, or Trip as volleyball players called her, has helped many girls reach their goals of going to college to play. One of those girls includes Maddy Boyer, who is a right-side hitter, outside hitter, and a libero. Boyer went to Valparaiso University after high school. Along with Maddy Boyer, Hannah Yaconis, a middle, went to the University of Akron on a scholarship to compete after playing with Trippi-Payne.

“She was on varsity for 1 year,” Trippi-Payne said. “Her mom is Carrie Leonard, and she played on a scholarship at Ohio State University, and her jersey number 21 is retired in our trophy case.”

Trippi-Payne also made all of the volleyball players feel special because of the nicknames she gave all of them. She would call the Freshmen “little freshies” or “little ladies.” She had individual nicknames for the players, as well.

Coach Trippi-Payne has helped so many volleyball players become better over the years. She made sure that she pushed the girls to be their best and fight until the whistle was blown. “Trippi was my first high school volleyball coach and she’s helped me so much along the way,” said Amanda Otten, a freshman who played for Trippi-Payne this past season. “I am glad that she decided to spend her last year coaching us when she could have retired last year. She has helped me improve so much not only in the game of volleyball but as a person. It is going to be weird next year because she was the one who made Batavia volleyball what it is…overall, she was a great coach.”