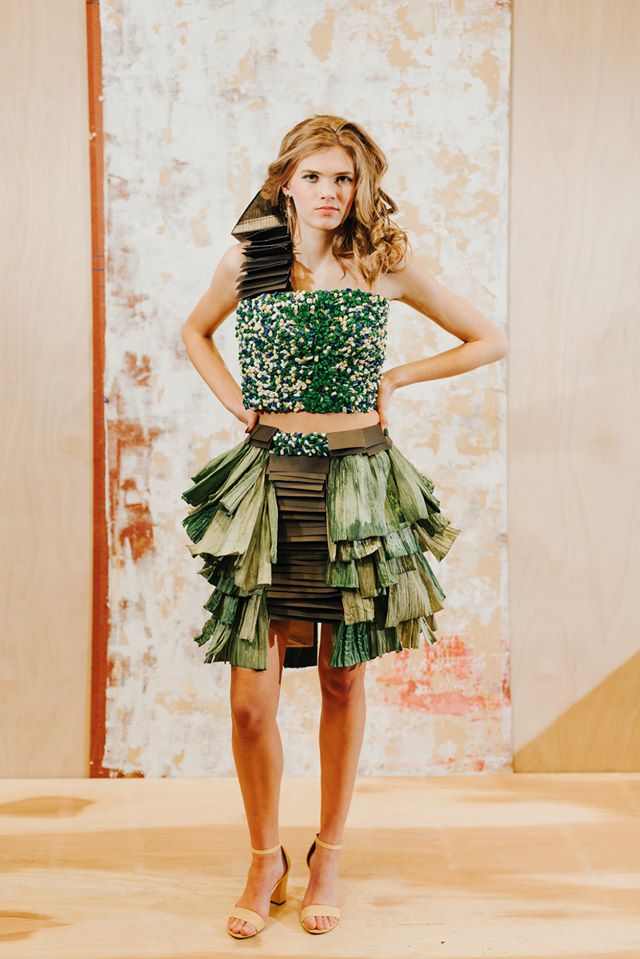 On Feb. 14, Batavia hosted its 12th annual fashion show.  Looking back at this year’s Rock the Runway, it truly Bloomed with creativity, a night filled with extravagant, unique, and complex fashion designs made of everything but fabric!

Each year students spend countless hours working on this event to make for an award-winning fashion show. Heavily supported by the community, Rock the Runway is sponsored by 18 local businesses. These boutiques, studios, and salons take the show to the next level by adding those perfect details. Loads of glitter, texture, pattern, and print fill the stage each year.

Participants attend a meeting in the fall and work on their design up until the show. In the weeks leading up to the show, they have several rehearsals.

This was an exceptional year, faculty sponsor Ms. Zalkus reports, “Bloom was meant to be the celebration of new beginnings and the potential of a fresh start.  This was our largest show yet with 45 designs.  Our designers are always looking to raise the bar and this show was no exception.”

This year’s theme brought a huge variety of design and imagination with several floral and plant patterns as well as insects like butterflies and dragonflies!

“Bloom was a theme that could become really personal to different people. A lot of the dresses showed an important part of their life and them growing which I thought was really cool,” said sophomore participant, Lainey Moore.

Moore herself created a masterpiece made out of corn! Beautifully modeled by her older sister, the dress consisted of spray-painted corn kernels and a dyed corn husk skirt.

A favorite piece of Moore’s was designer Preston Williams’ dress.

“I thought it was so cool because she was showing a phoenix, part of her dress was a black structure to look like ashes… her model protruded through it on stage… and she even used spices for part of it! The dress was super well done, aesthetically pleasing, and intricate,” Moore said.

Awards were earned and prizes were won. Some of the honors included the Total Package Award going to senior Grace Skiba. Creative Director Award to Zoe Fingers, and the People’s Choice Fashion winners were Grace Salyers and Addy Novak.

Rock the Runway is anticipated greatly by students, staff, and the community each year.

Don’t worry if you missed this year’s show, Batavia will surely Rock the Runway next year presenting the theme “Fear.”