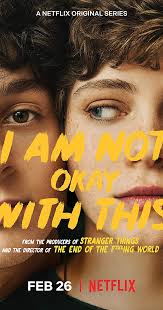 ‘I Am Not Okay With This’, a netflix original show that was released on Feb. 26,  is about a teenage girl dealing with some normal teenage problems and some supernatural problems. From blowing up burritos in detention to being covered in blood, this show can definitely be described as unpredictable.

The show takes place in the suburbs of Pennsylvania. Starring a teenage girl named Sydney Novack (played by Sophia Lillis) and her new found powers that are only released when she feels intense anger. Stanley Barber (Wyatt Oleff), her friend and complicated love interest, helps Syd face these unusual problems. Her best friend Dina (Sophia Bryant) helps Syd forget about her problems and is loved by Sydney’s mom (Kathleen Perkins).

Viewers of the show say that it has a similar feel to other shows but the thought is totally demolished when Syd’s unusual powers kick in. What makes the show interesting is that she doesn’t know why she inherited this unusual power. Viewers learn about Sydney and her day-to-day struggles as a teen. Lillis, the actress who plays Syd, did an amazing job overall when it came to showing intense feelings. Through family issues and friend drama, Lillis doesn’t fail to impress the viewers with her skills. She makes the audience feel her pain and was my personal favorite part of the show.

The episodes are between 20-25 minutes each, which gives fans plenty of information without dragging on the show. It makes it easier to binge, or even something to look forward to when you don’t want to watch it all at one time. It does leave the viewer with a cliffhanger on every episode which can tempt you to watch the next episode.

Overall, I would give the show four and half stars out of five because although the plot of the show was intriguing, I felt it lacked originality when trying to portray high school students and targeting a teen with powers for the show. To me, it seems a little repetitive but the show does include surprises that are definitely not expected and does not hold back on extreme events. I would totally recommend giving it a watch on Netflix.