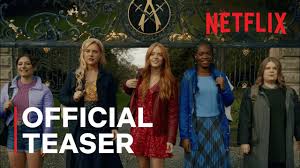 The new Netflix series  “Fate: The Winx Saga” was released earlier this year. Netflix’s spin-off of the Winx club made the action come to life. I spent the day watching the series with a total of six episodes but ultimately felt there was nothing special about it.

It had some major creative changes from the original. First, Techna and Flora have significantly changed in the live adaptation from the animated series Winx Club. Flora is not in the live-action and instead is replaced with a new character named Terra. Techna is not introduced in the show at all. It was upsetting to see characters be replaced after being so familiar with the plot of the original Winx Club.

The series is steered towards a more mature audience. The first episode opens up in a more eerie setting than the original Winx Club which we grew to love with bright colors, settings, and personalities.

The new series continues to follow the life of Bloom, which I felt like they used the same storylines as other teen-steered shows and it felt cliche. A typical bratty self-absorbed teen as usual.

Watching all six episodes, It felt very rushed, which left me with unanswered questions. Like, who is Bloom? Why did she drop everything to train to be a fairy? I’m assuming those questions were left for Season two.

The plot and the characters felt flat and carried no substance. I feel like they focused on romance more than the development of Bloom’s character and others.

This show is a decent adaptation for young adults. It is easy to compare the two. But, It is important to note that the show is not a remake of the animated series. The show is good if you like the more dark and mystical themes such as “Chilling adventures of Sabrina” but it’s not a show I would recommend to people.