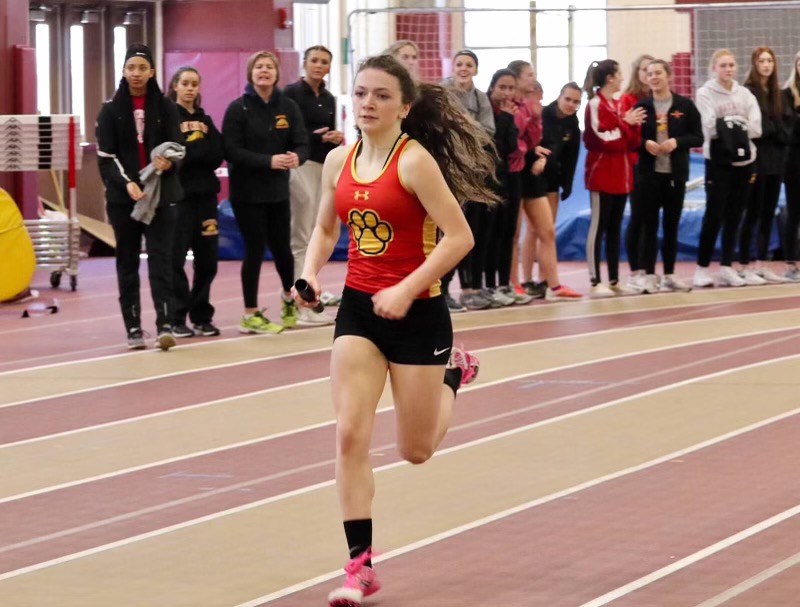 By Natalie Zagorski and Abby Tutt

Her mind, body, and motivation are all a machine, moving simultaneously together on a grind continuously year-round. She fuels up her body’s engine and produces award-winning accomplishments. All of her training has a purpose fueled by a passion for demolishing any limits others pose on her athletic abilities. Highly accomplished and widely looked up to distance runner at Batavia High School, Katrina Schlenker, is always improving and always pushing herself to the next level while making the most of where she is at right now.

Schlenker’s ability to push herself and provide her own determination has been the hiking boots to the mountains she has climbed and the success she has achieved. All the countless hours, days, and years spent devoted solely to running can be attributed to her physical but more importantly mental strength. To Schlenker, running is a passion and the benefits that it provides her out-weigh the exhaustion that most people associate the sport with. She reports being at peace when running in a way nothing else could provide for her.

“The runner’s high motivates me,” said Schlenker. “The feeling of success and working hard for something and having it pay off. Running is the best way to earn my freedom in this world and I love it. No one and nothing can bother or touch me when I’m running and I feel at peace and separated from the worries of my life.”

Schlenker attributes her success to her love for the sport and the ability to find what works best with her body to allow her to perform her best. She knows that what she puts in is what she is going to get out. Schlenker said that throughout the years she has found that a high protein diet, women’s multivitamins, and iron supplements provide her with the nutrition she needs. She knows that taking care of her body is the most important goal to have in mind, but the mentality is also key when going into a vigorous training schedule and racing at a high level.

The correlation between stress and one’s extraordinary ability can be seen as a positive correlation to many talented people. With one skyrocketing the other is bound to lose control without the purposeful intervention of the individual it’s affecting. Performing at a high level can directly correlate to pressure for some, but Schlenker handles both of these things well. Though pressure can have the ability to tear any person apart,  said that the more experienced she gets with running and in life, the more she can turn the pressure into focus and determination instead of stress. This strong mentality to not give in to pressure did not come naturally at first.

“I used to have a difficult time dealing with pressure but I have definitely adjusted to the weight on my shoulders,” Schlenker said. Schlenker has found a way to lighten this pressure while also taking the weight off of other teammates. Schlenker’s teammate Lili Bednarek speaks about how Schlenker’s positive attitude on the team isn’t only beneficial to herself but also to others around her and the overall team atmosphere.

Many of Schlenker’s teammates would call her a leader on the team. It’s not that Schlenker always needs to be heard, but rather it’s difficult not to see her.  By being the top runner of the team a sort of attention is drawn to her already. Schlenker feeds those eyes of inspired teammates with the secret of her success: hard work. Anyone watching Schlenker run would notice that she appears to be in no pain throughout her race. The determination plastered on her face from the instant the shot is fired to the second she crosses the line is as consistent as that on a painting. Her eyes narrowed to the rugged earth between the marked course lines and her feet like those of a Viking conquering foreign land. Every step with a purpose and every bit of energy channeled into victory.

Even if you couldn’t see Schlenker racing through the finish line week after week and year after year you’d be sure to hear about it or read about it in one of her interviews. Schlenker’s extraordinary athletic abilities are always accompanied by her modest yet energetic character. Her teammates report how much she cares about the success of the team even with her ability to accomplish a lot individually.

“One of her first questions after a race is how did YOU do or how did YOU feel,” said her teammate Lili Bednarek. “She’d ask how our team did before asking what people thought of her performance.”

This sort of character and care for her team isn’t only seen on meet day but also whenever she is with her teammates. Schlenker talked about the importance she puts behind taking care of her body and passes on this piece of knowledge to her teammates, as well. Teammate Jenna Schifferer said that she’s learned a lot from Schlenker about running health.

“She gives a lot of advice on how to take care of your body because she has a lot of experience…I often go to her for advice if I cannot decide how far to run or if I should cross-train when I am hurting,” Schifferer said.

The atmosphere on the team that Schlenker adds is nothing but positive. Teammates Bednarek and Schifferer have said that Schlenker is very positive all the time and that her motivation rubs off on others. This intrinsic motivation pushes Schlenker to the next level in her athletic performance.

Hillman contributes her success to not just her natural talent but also the amount of work that she puts in daily and her drive to fix what didn’t go well in the last race and make it better for the next one. Hillman said that coaching Schlenker is “the challenge that every coach would want.”

Schlenker informs us that a solid training week usually consists of a 10-mile long run, then either a double run (where she will run half of the milage in the morning and the other half at night) on Tuesday or a 5-6 mile recovery run, a workout on Wednesday, another double run on Thursday, then a base workout on Saturday, and Sunday is either a cross-train day or a 3-mile run. Schlenker also lifts about 3-4 days a week. This may seem extreme to most student-athletes, but for Schlenker, it’s the norm and the factor that separates her from the pack. This internal drive is key to her success.

All of Schlenker’s hard work and dedication pay off in the long run. Schlenker placed second, third, and second at the last three state championships. She also placed 27th at the Nike Cross Nationals race in 2018, with the fastest running time for a freshman, being 16:07. She also recently placed eighth in the Running Lane National Cross Country Championships in Alabama in 2020. People all over the country know the powerhouse of a runner, Schlenker.

From early on her coaches and family knew she had great potential as a runner. Schlenker’s dad tells us that her older Sister got her into running in sixth grade.

“I thought she was too small but after her first race I was proven wrong,” said John Schlenker, her father.

After her first race, everyone knew she was something special. Hillman knew of Schlenker early on because he watched a lot of the middle school meets. Her skill was noticeable from an early age.

“My wife was one of the coaches and I was able to see her from a young age,” said Hillman.

He also tells us that with Schlenker’s drive to be great, he knew that she was going to be a high-level runner since her middle school years.

All of Schlenker’s success and talent is nowhere close to being finished. She is constantly setting new goals for herself.

Her coach also feels like Schlenker can still accomplish so much more.

“She hasn’t reached her ceiling yet. She has an eye towards the future and she definitely has a bright future,” Hillman said. To be able to accomplish extraordinary things at such a young age is an amazing achievement and there’s no telling that Schlenker has what it takes to rundown milestone boundaries in the future.