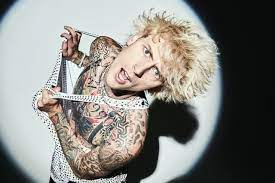 Over time, music and its flow have changed immensely. From Tupac and Micheal Jackson to Trippie Redd and WILLOW have made a great impact on the music industry. Along with these artists, Machine Gun Kelly Also known as Colson Baker. He’s gone through multiple genres and has risen from the very bottom to the top. Recently, Kelly has collaborated with Corpse Husband to put together their song “DAYWALKER!” In just one week, they gathered 11 million views and landed at No. 8 on US Hot Rock & Alternative Songs and No. 88 on US Billboard Hot 100. Along with success, it has brought some controversy to the table.

The song is hectic but also enjoyable. It is different from other everyday genres making it a bit difficult to get into. Many may consider it as whispering and shouting following the background music while others think it is an absolute masterpiece. The song and overall genre is not necessarily for everyone but we can’t say “DAYWALKER!” isn’t unique and creative.

Their new song has been classified as techno-punk and trap metal, genres that aren’t very popular in many regions. It is different than what Kelly usually records but the change has done him well. Along with the song, the music video was released a few days afterward.

On the other hand, the song and music video have managed to get a large handful of hateful comments as it represents how they would violently get revenge on those who have done them wrong. Some believe it is too violent, not appropriate for certain age groups, and overall includes horrible vocals. Many believe things such as video games and certain songs contribute to mental illnesses but with everything going on in the world I doubt a song is our main priority.

In addition to that, the music video was quite interesting and strange. The video was sectioned into six acts. It begins with Kelly brawling with another man in a parking lot. The second act shows Kelly sitting in an interrogation room, banging on the table due to frustration. During the third act, Valkyrae, an American YouTuber, portrays Corpse in the film. In the fourth act, the chorus of the song is played. It also shows Valkyrae spitting blood on a white wall. The fifth act is simple, showing a hand with blood making its way down the fingertips. Lastly, the sixth and final act highlights both performer’s faces in a single clip. In this scene, Kelly is presented with the joker’s iconic mouth slash from ear to ear.

I recommend it to many people but I believe the song may have been a bit better if a third artist were to be added but the way it is now, works out well. The second artist on the song, Corpse husband, is new to the music industry and gave everyone quite a shock when he announced he was collaborating with MGK. Corpse Husband also has millions of followers and a large social media platform but hasn’t shown his true image to the world.

Kelly is the best version of himself at this moment. We all enjoyed his rap career but he’s truly hitting the charts with a rap-rock type of genre.

For the most part, the song has done well and has been a success even though all of the hate it has received. If you enjoy the flow of this song, other artists who sound similar include GHOSTEMANE and $UICIDEBOY$.