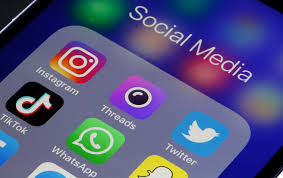 Students are getting phones at increasingly younger ages. A new study from Common Sense Media, an organization that works to advise parents about safe technology for kids, shows that 53 percent of kids own a smartphone by the age of 11, and 69 percent have a phone at age 12. Many of these kids download various social media apps. Spending time on social media significantly impacts kids, especially in their prime developing years in high school.

One reason teenagers may spend a lot of time on social media is the fear of missing out on inside jokes, connections, or invitations. Living in a world where most high-school-aged kids actively use social media sites poses a challenge. Kids may worry that they will be overlooked or won’t form strong relationships with their peers if they are not engaged in social media.

There are numerous benefits to social media apps. They allow people to stay in touch with family and friends, as well as make new ones. Media platforms may also help teens develop communication and social skills, which will translate to their face-to-face interactions.

Social media can help young people form communities, pursue areas of interest, and share thoughts and ideas. On various platforms, teens and preteens can seek out and form groups with similar interests and hobbies. Even just by following influencers that captivate their attention, people can deepen their knowledge of a subject.

Although social media use has many advantages, spending a lot of time on these apps increases the opportunity for harmful interactions and cyberbullying. Unlike bullying that often happens on school grounds, victims of cyberbullying cannot get away from people who are being hostile, and it happens out of sight of teachers and parents. Through social media sites, false rumors can be spread about people, greatly damaging their reputations. It is typical for bullies to have less of a filter when they can say hurtful things through a phone screen rather than eye-to-eye.

Social media may also affect the amount of sleep high school students are getting. Apps like Tik Tok make it easy to keep scrolling through videos for hours on end. According to the BHS survey, 34 percent of people spend more time on Tik Tok than any other social media. Even if kids are not using social media late at night, the blue light from screens can disrupt their circadian rhythm. This disruption can make it more difficult to get a good night’s sleep.

Another concern with social media platforms is their impact on young people’s self-esteem. Teenagers are highly susceptible to comparisons and low self-confidence. Posts made by celebrities and other influencers create harmful and unrealistic standards of attractiveness and success. But potentially even more damaging are posts made by classmates and friends. Hitting way closer to home, teens can have a constant view on their feeds of only the best and most desirable parts of their peers’ lives. High schoolers often conceal their struggles, imperfections, and less enviable parts of their lives. Only seeing people at their best moments can be devastating to teens’ and preteens’ self-esteem and morale. When they compare their friends’ and classmates’ posts to their own life, it may seem dull and uninteresting.

Additionally, filters on apps like Instagram and Snapchat allow people to edit photos and make themselves appear more attractive. The filters smooth skin imperfections, make teeth appear whiter, and brighten eyes. Using these features worsens body image for both the user and the people viewing the posts. It enforces the belief that people’s natural looks are not acceptable.

While teenagers use social media, they need to be aware of the mood the apps put them in and avoid falling into a dangerous mindset. It is also crucial to remember that not everything that can be found on social media is in line with reality. Social media isn’t going anywhere, and people should not underestimate its role in society. It will most likely continue to be an integral part of teenagers’ and young adults’ lives for the foreseeable future.