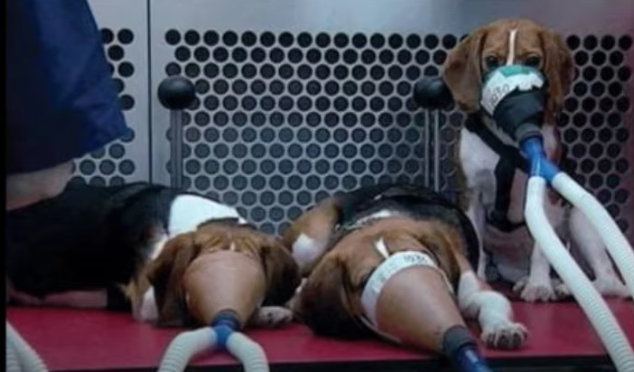 Thousands of people believe that animal testing has long since disappeared, but it’s much worse now than it has ever been. Animals are companions, they shouldn’t be abused by scientists and kept in laboratories for such long time periods.

Each year, over 100 million animals such as mice, rabbits, dogs, cats, hamsters, monkeys, fish, and other animals are killed, burned, crippled, and abused for food, makeup, chemical, and drug testing all over the world, according to the Humane Society.  The United States alone tests on 25 million animals yearly. The number may be larger as not all animals are accounted for.

Unfortunately, rabbits and mice are the most used animals during testing. Skin and eye irritation tests are run mostly on rabbits, chemicals and products are wiped directly on their skin or dripped into their eyes while being restrained without pain relief.

Another test includes mice and force-feeding them chemicals. These tests often last weeks to months so researchers can look for reactions such as cancer and birth defects.

The third most used test is a “lethal dose” test. Rats and mice have large doses of chemicals forced down their throats in order to determine the amount that will lead to death.

Lastly, at the end of nearly all tests, animals are decapitated or suffocated for further research.

Though surveys have been launched, not all animals are accounted for in U.S. statistics and receive no protection under the Animal Welfare Act, meaning there could be millions of other animals suffering that we don’t know of.

In fact, the majority of testing on animals is due to the cosmetic industry (makeup, shampoo, hair products, etc.). If you’ve ever looked at the ingredients in your shampoo or eyeliner you’d see a very long list. Well, every single one of those products is tested on animals as well as the product itself in order for it to go to stores and into your makeup bag or bathroom.

A few common brands that continue to test on animals include AXE deodorant, Bath & Body Works, CeraVe, and Head & Shoulders.

Another animal commonly used for testing are dogs, specifically beagles, and hounds. They are chosen for their kind, friendly, and trusting personalities. Recently, researchers have acknowledged that most of the population of beagles is specifically bred for living in labs. Beagles being larger than mice and rabbits have a large nearly two-foot tube forced down their throats in order to get them to consume the chemicals. There are nearly 60,000 hounds in about 365 different facilities in the United States.

Due to the rise in animal testing, many determined people have gone undercover in these facilities to film and prove what is going on around us.

For example, in Michigan, the vice president of Animal Research Issues at the humane society of the United States, Kathleen Conlee, went undercover. At the Dow Chemical facility, 36 beagles were being used to test pesticides.

Unfortunately, none of their actions are illegal and so the government can’t truly do anything about it. Often, federal agencies like the FDA and EPA request testing to approve the products or provide funding for experiments.

Another recent undercover discovery includes the U.S.D.A. It was discovered that they were researching “kitten cannibalism” which meant feeding kittens to the dogs for “experimental” reasons.

In many pieces of footage, although all that’s been done to them, the dogs are still very happy to have human contact. Sometimes they are given a toy but that doesn’t make up for all the pain brought to them, the fact that they never see sunlight, and the very small crate they are kept in for days, weeks, or even years.

The testing being done isn’t actually necessary and it is clearly avoidable. Many of those brands that continue testing, test ingredients that no one has used before so testing them comes as “mandatory” for them. This can clearly be avoided by simply using ingredients that have already been cleared as safe for human use. If brands want to continue testing then they should turn to alternatives such as human cell-based testing or high technology.

Overall, nearly 40 countries have banned animal testing. Every country involved in the European Union Australia, Columbia, India, Iceland, South Korea, and many others have placed a ban on testing in their countries. The United States and Canada are yet to join them.

Attention has been brought to this gruesome treatment and we must do what we can to protect and save them. A popular video that has gone around social media, especially Tiktok, is “Save Ralph” by the Humane Society of the United States. This video can be found on YouTube. If you’d like to do more, look up Crulety-Free Kitty for a list of brands who have left animal testing behind.