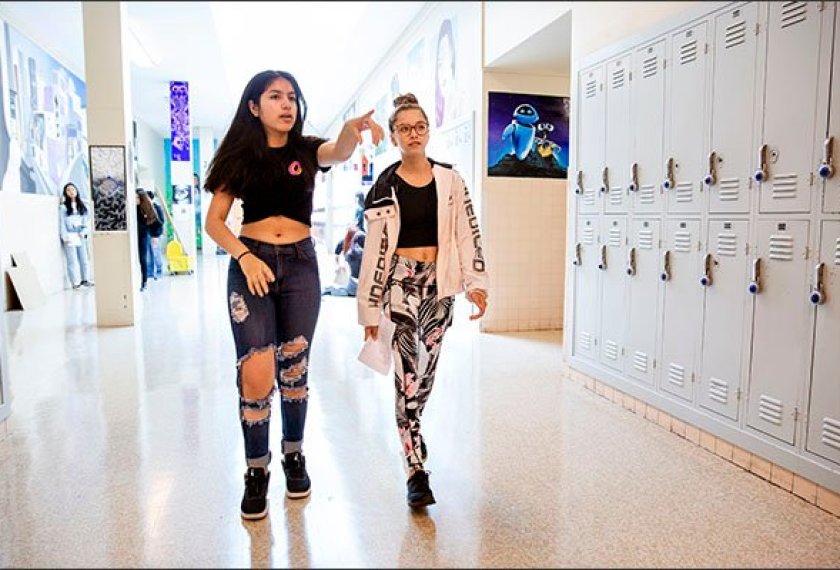 Every year as spring rolls around comes a few things: seasonal allergies, outdoor gatherings galore, and another string of teenage girls getting dress coded in school. This year has been no different; already, many girls at BHS have been pulled aside by teachers in the hallway and told that their clothing is inappropriate. But why only girls? Well, the answer is simple: dress codes related to modesty are misogynistic and need to be abolished.

Some dress codes, like ones saying you must wear shoes or that you cannot wear clothing that displays hate symbols or profanity, are obviously not an issue. The problem comes in when the dress code places strict rules regarding what parts of your body you are or are not allowed to show. These dress codes always seem to only put restrictions on what clothes girls can wear, whether that is through saying that directly or banning clothing only commonly worn by girls. The argument for these rules always seems to be pretty much the same: “Dressing immodestly is distracting towards boys.”

These dress codes promote rape culture and victim-blaming by teaching that girls must cover themselves in order to prevent sexual harassment or assault from boys instead of teaching boys to simply not sexually harass or assault them. It is this same mentality that is the reason why the first thing people ask when someone says they were sexually assaulted is, “Well what were you wearing?” The truth is, how much or how little clothing someone is wearing has absolutely no impact on how much respect they deserve or how unacceptable sexual harassment and assault is. Girls should not be held responsible for the actions, thoughts, and eyes of their male peers.

“It’s just infuriating because I don’t know why we are held accountable for boys,” said BHS student Kelly Hunecke. “We can’t control that. The problem isn’t us, the problem is the boys thinking what they are thinking.”

Dress codes also promote the over-sexualization of teenage girls. When a school makes rules about things like how short skirts or how low necklines are allowed to be, they are (whether they realize it or not) saying that breaking those rules is inherently sexual when really that is in no way true.

“Many girls who are dress coded are just wearing what they want to wear and it’s not for anyone but themselves,” Hunecke said. “They wear it because it makes them feel confident, not because they are trying to show off or do whatever they think we are trying to do.”

Hunecke also brought up another interesting point.  Are boys being distracted by girls’ clothing choices even in “issue”?

“And honestly speaking, I don’t think that’s even much of a problem. I don’t know many guys at least that are like that,” Hunecke said.

Not only do dress codes sexualize and blame girls for things that are not their fault, but it also paints all boys as pigs unable to control themselves at the sight of a shoulder, which is incredibly inaccurate and unfair.

Dress codes are also an unnecessary source of humiliation. Having an adult teacher interrupt a student’s learning to scold them about their clothing choices is not something students should ever have to worry about at school. Students should instead just be able to focus on learning. This humiliation is even worse when you are forced to go down to the office to put on clothes the school deems more appropriate. Having girls miss the time they should be spending learning to go change in an attempt to help boys focus better shows that the school cares more about boys’ education than girls.

It can be difficult to even find clothes that conform to the dress code. Specifically, when it comes to shorts, dress codes often require that they be a length not commonly sold in stores. Girls shouldn’t have to search far and wide for shorts that match the dress code. They should just be able to wear what makes them feel comfortable and confident, whether that means a six-inch or a two-inch inseam.

Many make the argument that modesty is required in office settings, so how could it be okay there but wrong in schools? The reality is that these are two completely different scenarios. Having a private, non-government funded company requires professionalism which contains modestly as just one portion of that standard is in every way different from requiring students, children, to dress with modesty but not a single other element of American professionalism in a government-funded institution.

Even people who agree with this general claim may often say one thing, something along the lines of, “Yes, I agree but there needs to be a line, you can’t let it go too far.” First of all, where would that line be? Would a cropped tank top be okay? What about a cropped tube top? What if I wear that with low-waisted shorts? But the bigger question I propose is why does there need to be a line? Why is it so important for girls to cover their bodies? And, why should anyone feel like they have the right to tell somebody else what they can and cannot do with their body? Modestly is great if it is a choice. Many people find dressing modestly to be empowering and helps them feel confident, and that’s great! But that is not true for everybody; in fact, for many people, it is the exact opposite. Schools need to stop enforcing these outdated, sexist rules onto their students.