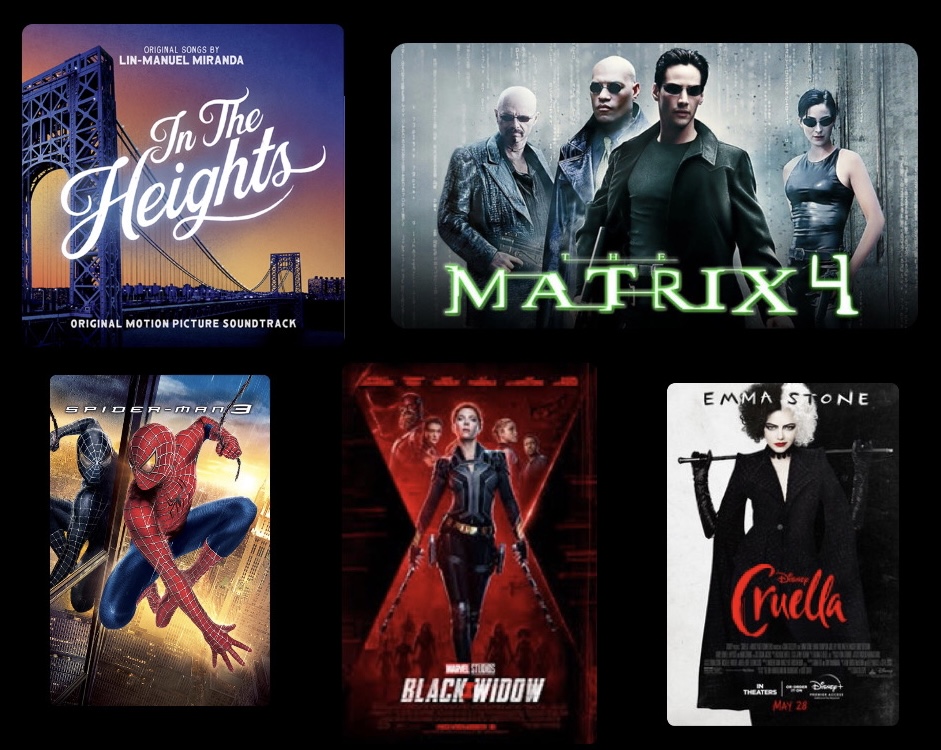 It’s time to get excited! There are a lot of good movies coming out in 2021. Here are five of the top picks for movies you can watch in theaters this year.

On July 9, the long-awaited Black Widow stand-alone will come out in theaters. The main character, Natasha Romanoff, is played by actress Scarlett Johansson. Despite the character’s questionable past, she was accepted by S.H.I.E.L.D. and became one of their most valuable agents. In the Marvel timeline, Black Widow takes place after Captain America: Civil War. The movie will dive into Natasha Romanoff’s past and her path to becoming an Avenger.

Starring Keanu Reeves, Priyanka Chopra, Carrie-Anne Moss, Jada Pinkett Smith, Jessica Henwick, Neil Patrick Harris, Daniel Bernhardt, and Lambert Wilson, the fourth movie in the Matrix series is making its entrance in December. The film was initially set to be released in 2022, but the filming crew was able to overcome setbacks due to COVID-19 and move the release date to December 22. The cast and director’s decision to keep the plot concealed until the movie is in theaters has left fans of the series anxiously awaiting what the film will reveal.

The live-action version of Disney’s 1961 101 Dalmatians will come out on May 28. The scene is set in 1970s London, and the movie will feature Emma Stone as the young villain, Cruella de Vil. Emma Thompson, Joel Fry Paul, Walter Hauser, and Mark Strong will also feature in the film. It will capture many aspects of the original movie while adding a unique spin to the plot.

The musical In the Heights first debuted on Broadway in 2008. The song lyrics were written by Lin Manuel Miranda, who also wrote and directed the popular musical Hamilton. Miranda’s dream of turning “In the Heights” into a movie has finally come to fruition. It will be released on June 11, in theaters and on HBO Max. Lin Manuel Miranda will play Piragua Guy, and Anthony Ramos, the dual role player of Philip Hamilton and John Laurens in Hamilton, will act as Usnavi de la Vega.

Lead actor Tom Holland already has fans excited for the third Spider-Man movie. Rumors have surfaced about returning villains from past films, including Doctor Octopus from “Spider-Man 2” and Green Goblin from the first Spider-Man Into the Spider-Verse. It is sure to be an ambitious, action-based cinematic production with scenes that will keep viewers on the edge of their seats. Movie-lovers can look for it in theaters on December 17.