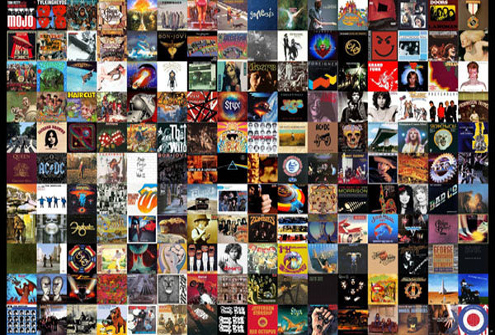 When you are a musician you learn a lot about music. You learn to notice things about bands or certain songs that non-musicians may not understand. Nowadays, not many teenagers listen to music that was popular in the 70s and many people don’t realize why classic rock that was popular then is still popular now. Much of the music produced then is so good that it has stayed popular for more than 30 years. When this music was produced, we did not have the technology we have now but that is what makes it better. They couldn’t do all the fancy things they have now to edit the singer’s voice. Back then, to be a star you had to be amazing at what you do. There weren’t many amazing musicians back then because it was harder to make music at the same levels as others. In the 70s, no one cared about any of your flaws as long as you were good at what you did. I believe the artists below are revolutionary. If they can change my world, they can definitely change yours.

13.) The Romantics
This American rock band was formed in 1977. They originated in Detroit, Michigan. My favorite song by them is “What I Like About You,” which came out in 1980. Their lead singer, Wally Palmar, has such an original voice that he can do a variety of things with. Every song is very different from the next. They have a retro sound to their music that is much more complex than the music being made today. “What I Like About You” is such a fun song; it makes me want to get up and dance every time I hear it.

12.) Kansas
Kansas is a rock band that became popular in the 1970s. People were intrigued when they heard their hit singles “Carry on my Wayward Son” and “Dust in the Wind.” The band originated in Topeka, Kansas. Their music is so inspirational. It tells a story and I could jam out to it all day.

11.) Journey
I was lucky enough to see Journey in concert a couple years ago. I was just getting into classic rock when I saw them. I remember saying “wow they sing like everything” because so many good classic rock songs were written by them and I never realized it before. Journey formed in San Francisco in 1973. They were most popular between 1978 and 1887. There’s no better feeling than when I get to sing “Lights” during karaoke night for people who grew up when classic rock songs were coming out.

10.) Ray Charles
As you may have realized, I like a variety of different styles of music. Ray Charles Robinson became blind at age 7. He learned to play piano from a man that lived in town who noticed his interest at a young age. He was one of the first people to compose soul music by combining blues, rhythm and blues, and gospel influences. He also became one of the first African-Americans to run a record company. He wrote R&B, soul, blues, gospel, country, jazz, pop, and rock and roll. The height of his career was during the 1950s and 60s.

9.) Foster the People
Foster the People is an American indie pop band. They originated in Los Angeles in 2009. In 2011 their song “Pumped up Kicks” was released. The singer has such an unusual, tone and their music is chill, but it still makes your body want to move. Their lyrics have such a complex story behind them and you won’t be able to follow along with the story unless you pay close attention to what they are saying.

8.) Nirvana
This is a grunge, or alternative rock band with one lead singer/guitarist, one bassist, and a drummer that changed often. They were active from 1987-94 and they started in Aberdeen, Washington. They released three full-length studio albums in their career: “Nevermind”, “In Utero”, and “Bleach”. Their most popular song is titled “Smells Like Teen Spirit” from “Nevermind.” Everytime I listen to it, it’s hard to keep myself from nodding my head to the beat of the music.

7.) Hall and Oates
My parent saw this musical duo twice in concert and I am so jealous. I would have killed to see them perform; their musical talent is so immense it’s insane. Daryl Hall & John Oates preformed pop rock, blue-eyed soul, soft rock, and jazz music. Throughout their career, they sold 40 million records. They are originally from Philadelphia, Penn. Their songwriting skills are amazing and Daryl can do so many things with his voice that others can’t. I think that it definitely leaves a nice touch to their music.

6.) Queen
This is a British rock band that originally formed in London in 1970. They had absolutely astonishing vocals in their music. The chords they sang were so good. Their most famous song was released in 1975 and is titled “Bohemian Rhapsody.” Their music is an escape from this world. I think what they have established with multiple great singers in their songs is so original. Not many bands use vocals as as much as a focus point in their music and they accomplished it so well. My favorite song they wrote is called “Fat Bottomed Girls.” The bridge in the beginning is so satisfying. The singers start off singing chords acapella and then the rock and roll chimes in. The messages portrayed in their music are really words to live by.

5.) Pink Floyd
Like Hall and Oats, my parents saw Pink Floyd twice and I wish I could have been there. This is an English band that formed in London. Their work has been considered progressive rock, art rock, and psychedelic rock. My favorite song by them is “Another Brick in the Wall.” Their music lets me escape this world. It takes me into a daze and sometimes it feels so good to get away. When I’m listening to them, I am able to escape reality and get lost in the song.

4.) Radiohead
This is an English rock band that started in Abingdon, Oxfordshire. They are known to write art rock, alternative rock, electronica, and experimental rock music. I think their song “Creep” is amazing. It has such a strong message and the music makes it even stronger. It’s one of those songs that I could fall asleep to, but I could also rock out to. I could put it on replay and whisper every word over and over again and never get tired of it.

3.) Sublime
The best thing I did this summer was see Sublime with Rome in concert. Sublime was an American punk band from Long Beach, California. The lead singer/lead guitarist died soon after they became really popular because of a drug overdose. Years later, they replaced him with Rome who has a very similar sounding voice. The original singer was so talented its unbelievable what he can do with his voice. Their music has this amazing vibe that you get when you listen to it. It flows so well and the hint of reggae is perfect. They are known for performing ska punk, alternative rock, dub, and reggae rock music. I think when the band went to Africa to learn about reggae music it definitely benefitted them.

2.) The Police
I honestly think this was one of the best classic rock bands of all time. Sting’s talent is mind blowing. The Police was an English rock band that formed in London in 1977. They are known for producing new wave and reggae rock music. My favorite song by them is titled “Wrapped around My Finger.” Their music gets stuck in my head for days at a time and I’m glad that it’s their music that I’m thinking of rather than anyone else’s. Their music is chill but also it’s hard to keep myself from breaking out into song while I’m doing my homework. If their music is playing, sometimes I will get distracted,I’ll just dance around my room until the album is over, and I’ll end up getting nothing done. When I’m having a bad day, I will listen to them and honestly it heals me.

1.) Halsey
Ashley Nicolette Frangipane is the newest artist that I listen to. Halsey is an American singer/songwriter that produces electro pop or indie rock music. Her lyrics are so poetic and inspiring. She is young, so lots of teenagers can relate to her music. Halsey is literally my idol. Her lyrics are so beautiful and the stories they tell are so inspiring. Her voice is so different from everyone else. I think the messages she portrays to the world are what makes her music so great.

Alexa Garcia, Another Brick in the Wall, artists, bands, Bohemian Rhapsody, Carry on my Wayward Son, classic rock, Creep, Don't Stop Believing, Foster the People, Gasoline, good bands, good music, Hall and Oates, Halsey, Hold Me Down, I've Got a Woman, Is There Somewhere, Journey, Kansas, music, music groups, New Americana, Nirvana, Pink Floyd, Pumped up Kicks, Queen, Radiohead, Ray Charles, Roman Holiday, She's Gone, Smells Like Teen Spirit, Sublime, The Police, The Romantics, Top 13 artists you should be listening to, What I Got, What I Like About You, Wrapped Around My Finger, Young God