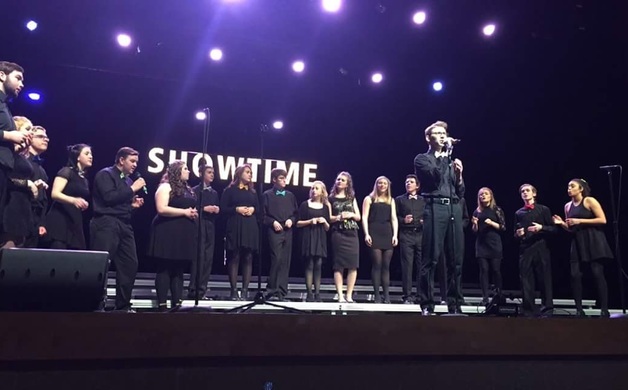 By Abby Hill and Alexa Garcia

On September 28th, Peter Barsch, the chorale teacher, will bring those who have been picked to participate in a call back audition to their first rehearsal with the Chromatics. From there, Barsch is going to see which members blend with the group and decide who will be joining the Chromatics this year.

The Chromatics will be a group of about 20-30 people so that they always have multiple voice parts ready.

“We can have a couple of the sopranos and a couple of the basses so the group can be out there and busy and the town sees all these sweet young wonderful children, sees good stuff being done at the high school.” Barsch said.

The Chromatics are self-run and work on skills other than singing within the group.

Our school has 2 show choirs, but this is the first occurrence of an acapella group at our school. Acapella is a style of music singing without musical accompaniment and therefore requires different skills than a show choir.

“I’m biased, but it’s one of the highest most challenging musical experiences you can have.” Barsch said, “It’s terrifying but at the same time, it requires a lot of ear, it requires a lot of excellence and there’s no ceiling on it… I think also having to really really deeply listen to each other… They have to really interact with the other people in the group, you have to listen really really hard. And you gotta play off of each other.”

Acapella, since it is without musical accompaniment, requires many skills beside singing. Vocal percussion, being one of those skills, works out different muscles than singing; therefore, an acapella group has a different sound than a show choir.

“It’s gonna be tough to get in, but for the kids that are in it, it can be super challenging, it could be the pinnacle of their ability in music and they’re doing songs that everybody already knows and likes.” Barsch said

The reason it is going to be tough to get in is that the group is based off of the concept that they can replace seniors who graduate with new freshman each year. This way, the members in the group already have the knowledge they need to perform multiple songs already at the beginning of the year.

“What I’d like to do is get to the point where, we replace the members who graduate, we bring in some new people but this group is ready to perform in the summer or at Homecoming, or at the beginning of the year,” Barsch said. “When all these other school groups are trying to figure out what their names are, we’re ready to go and we can do an hour. In order to do that, I’m gonna need the continuity of people who do it for more than one year”

With this concept in mind, those in the group will spend years with each other. This also allows less people into the group as the years pass, depending on the amount of seniors who graduate.

“There’s gonna be a tremendous intimacy between the people you sing with over the course of a few years,” Barsch said. “It’s gonna make it a little more exclusive, which is bad in that it’s not open for everybody, but good for the people that are in it are really gonna be able to explore it more deeply and really connect and grow together as creative musicians, and people to go through high school with.”

Last year, the Chromatics were a brand new group and lacked some of the equipment needed for them to perform.; however, at their last performance they gained new sound equipment.

“It helps that we got some gear some equipment at the end of last year,” Barsch said. “We had the performance at the gala that we didn’t really have the right sound equipment for so the sound came off kinda strange.”

Throughout their next season, they plan to perform on as many occasions as they can at restaurants and other gig, advancing their technique as they go.

“But I’m super proud of where we’re at and I love the joy that the kids are having singing, and like, taking the songs they might know and reinventing them in a new way… we can take what’s familiar and reinvent it, and make in a way that’s exciting.”