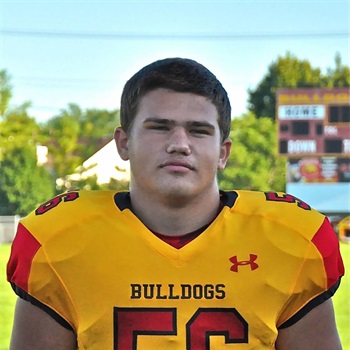 Getting good grades, practicing a sport while also practicing an individual talent, and looking towards the future can be overwhelming for some. But not all. One prime example of this is Jack Darby, a senior on the Batavia football team. Excelling both in the classroom and on the field as the starting center and long snapper, Darby has managed to set himself apart from many other high schoolers. With a successful academic record of a 3.75 GPA, a 31 on his ACT, and a football history to match, Darby has large plans preparing to go to college.

While most high school students go to college based off of grades and high school involvement, Darby is being gifted the rare opportunity to walk up to a college coach and receive the eventual scholarship that many athletes can only dream about. Yet the path he has taken to get to this level has not been one many other football players capitalize on, long snapping. This unique talent is a specialization often unappreciated but desperately needed by many big-time college football teams and for this reason it should carry him into college-level football.

Long snapping, for those who don’t know, is the act of hiking (or think throwing between one’s legs) from the line of scrimmage to either 15 yards for a punt or 7-8 yards for a field goal. It is not uncommon to see Darby on the sidelines Friday nights, practicing snapping at a distance that many fans can not appreciate. This skill is something that few specialize in and with the importance of special teams taking a greater role in college football, those who cash in on this such as Darby has, can reap the benefits of hard work and practice.

According to Kohlskicking, a four and a half star rating (which translates to at least  strong division two caliber skills) and an average 6.9 second 15 yard snap time sizes up well when compared with many division one recruits 0.7 second snaps.

“Last summer I practiced everyday for about 2 hours” besides attending college camps and the occasional coached snapping session, according to Darby.

This hard work has gained the attention from schools such as Western Michigan, Vanderbilt, West Point, Princeton, and Southern Illinois. But this process has not yet ended for Darby, who said that most long snapping recruiting actually happens after a player’s senior season. He is hopeful to receive more offers going forward.

“Jack’s character on and off the field is great,” said running back Dana Anderson. “He’s always a hard worker and a great teammate to be around.”

Though he stands apart in his field of long snapping, Darby is not only defined by his on-field skills but he also excels as a student and as a member of the community. Many times you will see Darby out and about in the community doing volunteer work and helping those who need it.

“He’s made everyone around him a better person,” said longtime friend Jay Hunt.

Not only do these friends see that Darby has what it takes to be a successful high schooler, but they also recognize that he has the strong potential to turn his hardwork and passion into a feasible scholarship.

“He is a very athletically gifted and succeeds academically. He has a very bright future in life,” Hunt said of Darby’s future in and out of the sport.

It is thanks to both this character and talent that Darby has a very bright future moving forward. Being granted the opportunity to attend numerous universities with some sort of financial reward, Darby’s hard work has granted him an opportunity unlike many others. For this reason, the last name Darby is sure one to watch for in college games in the future.

“He is one of the best long snappers in the country,” Anderson said. “As long as he keeps working hard like he has done I’m sure he’ll do great.”