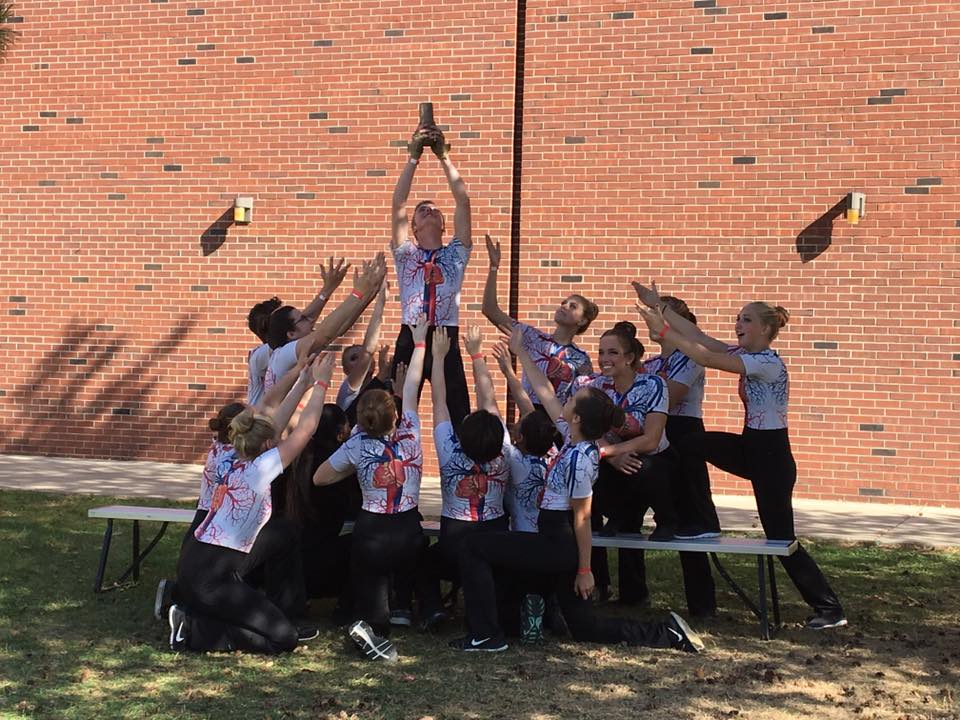 With chins lifted high, the color guard performs across the field; flags and rifles spinning in time behind and around the band. “Oh, they’re just spinning flags. That’s not even a sport.”

Color guard performs with the band in the fall and competes on their own in the winter. Sports used to be thought of with a ball or equipment, now dance and cheer are more accepted as the sports they are; however, the color guard uses many pieces of equipment, dances, and competes, yet, they’re not considered a sport.

A sport is defined as an activity involving physical exertion and skill where an individual or team competes for entertainment and enjoyment. The color guard practices for hours on end then continues on to compete in marching band competitions in the fall and winterguard competitions in the winter.

“The guard is absolutely exhausted after they perform, they practice a lot to get where they’re at and they’re really good at performing,” said Alexa Garcia, a member of marching band.

Throughout the 3 months that the marching band has been practicing, the color guard has spent 367 hours rehearsing with and without the band. This is from a total of 87 events: football games; competitions; 2-hour, 8-hour, and 4-hour practices; and a summer camp before school started. Competitions can last anywhere from 10 hours to 22 hours, depending on where and how important it is.

Unlike most of our sports at BHS, the color guard doesn’t cut anyone after try-outs. This means the majority of their practice time is spent building skills learned in previous years as well as new skills. Skills built during the color guard seasons include dance, coordination, listening skills, focus, performance quality, teamwork, communication, stamina, and skills on multiple pieces of equipment.

“It requires the same amount of physical strength as the sports I was in [soccer and martial arts] as well,” said Owen Baty-Barr, one of the color guard captains. “Rifle and saber require a lot of upper body strength as well as hand-eye coordination to toss and catch… the fact that everyone on the field has to move and spin the same way requires great attention to detail and a lot of time to get the basics down.”

Over the past few years, dance has been more widely accepted as a sport. In 2016 over 75 percent of the world’s population have agreed that dance is a sport due to the skills needed, such as flexibility and coordination. In order to perform to their potential, the color guard dances during their shows while using their equipment. If dance is recognized as a sport, then color guard goes hand in hand with this and should also be recognized.

I asked multiple people if they considered color guard a sport and the main argument for “no” was that they either didn’t know what it was or they “just throw flags.” Flags are only a small portion of the color guard’s performance. As stated above, the color guard dances, spins other pieces of equipment, and performs. Just because someone doesn’t know what an activity is, that should not dictate if it’s a sport or not.

“No one knows the time and energy it takes it do what we do. They often think it’s easy and that we’re just tossing flags, but it’s so much more than that,” said Emma Cardelli, a BHS color guard member. “It’s our job to tell the story of the band, we have to make sure people feel that this sport is our passion. It’s a sport where dance and equipment come together to create something unforgettable and no one takes the time to know how much we go through to get to that, just because it doesn’t include some sort of ball.”

With their skill in dance and hand-eye coordination, the color guard is still overlooked and grouped as a part of the music program. A color guard is defined as a non-musical section of the marching band that performs to provide a visual interpretation of the music that the band plays, but the guard, at BHS, is so much more than that. We are a family that supports one another while creating a story with our performance. Throughout the past 3 months, I have had many ups and downs, but the color guard has been there with me every step of the way. If any activity deserves this sort of recognition, it’s the color guard.