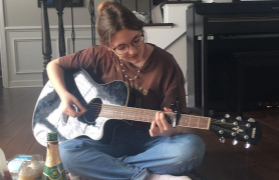 Lauren Brogan has been interested in music for the majority of her life. Whether it’s a cover of a song or a verse of an original song, she will spend up to weeks perfecting it to the best of her ability to make sure everything sounds right and putting a lot of effort and attention into the song at hand.

“Being in choir made me realize how much I wanted to be a good musician, and I’ve been doing it since I was in third grade,” Brogan said.

Brogan is now 15 years old, and still has the dream of being a musician. Being in the process of writing a song, and managing a social life, and working a part-time job has not been easy.

“It’s really stressful and I try not to overwhelm myself, and since music is like my meditation (even though I do meditate) I find myself playing instruments or listening to music when I’m stressed,” Brogan explained.

Her mom has also been watching her grow up with music being a big part of her life.

“Watching her grow up with music has been a whirlwind. She has been singing to herself since she could talk, and she loved music from the very beginning.”

Her mom also grew up playing piano, so Brogan has a musical background in her family.

Brogan’s music teacher has been teaching music for almost 14 years when he started teaching his brother’s best friend. He’s been very supportive of Brogan and her song that’s still in the process of being made. She’s been taking lessons from him since February of 2021, and he explained how he’s seen so much improvement in her.

“One of my favorite things to see in my students is just the progression.” Her music teacher Tyler said.

Creating a music career in a small town in Northern Illinois out of almost nothing is not easy, which is easy to imagine. The first step Brogan took was to make an Instagram account where she posted a video of her singing “Champagne Problems” by Taylor Swift while playing it on guitar.

“Well, I have an Instagram account that I sing and play guitar and play piano on, but it only has one post right now because I’m still in the process of making more videos,” Brogan said.

Rushing lyrics is never the answer for Brogan.

“I just like going with the flow with my music, because when you force creativity it turns into stress and I never want to turn something that I love so much into something stressful.”

This method of writing song lyrics is what works for her.

“Also, my dad really loves music too, and my parents had a really heavy influence on my music taste and career. My dad loves the band Guess Who, and his favorite song by them is called ‘Star Baby,’ and when I was little he used to call me his star baby. I also love the song itself so much, it’s so fun and upbeat and gets me in a really good mood.”

She explained while talking about how much of an influence her parents have on every aspect of her musical life.

Not only have her parents had a big influence, but other musicians have too.

“My biggest inspiration is probably Taylor Swift because I love her mindset with just being a musician, and I also love the way she treats people.”

Not only has Taylor Swift had a big impact, but so has Stevie Nicks.

“I love Stevie Nicks. Stevie Nicks is such an inspiration to me. I love her solo stuff, and Fleetwood Mac, and the music she made with both of those. It’s just phenomenal.”

Brogan has been growing into a musician for her whole life, and all the time and effort she seems to put into it is highly respectable. The process of writing a song, while being a high school student, and while having a part-time job, and while having a social life, and making time for friends is not easy to handle but it does seem like she manages it well. When it comes to music, she puts full effort into the song. Whether it’s an original song or a cover of another song.