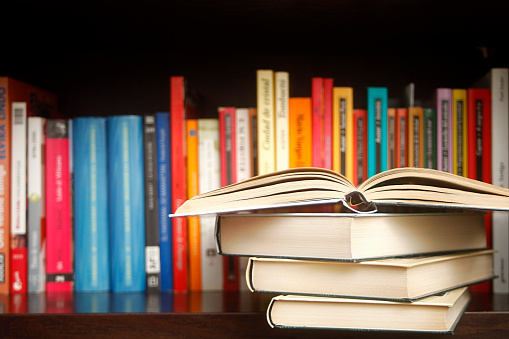 Six of Crows is a fantasy duology that follows a wide cast of characters, most prominently: Kaz Brekker. Per the book’s official synopsis “Kaz is offered a chance at a deadly heist that could make him rich beyond his wildest dreams. But he can’t pull it off alone.” Thus a group of ragtag teens with skeletons in their closets forms. Each character undergoes major development throughout the story without the plot being sacrificed in the process. The plot is creative and the characters are dynamic. Six of Crows and its second book, Crooked Kingdom, are captivatingly transportive as the reader is taken on an enthralling adventure.

Johnson’s Truly Devious is a four-book series set at the private prep school Ellingham Academy where students are admitted for specific skills. Such skills are determined by the student and those accepted receive special training and opportunities to truly master their skill. However, the school has not always run smoothly. In the 1920s a series of murders occurred at the academy. The murderer, who went by the alias “Truly Devious,” was never identified and the case went cold. So, when self-proclaimed detective and lover of all things true crime, Stevie Bell, learns of Ellingham Academy, she applies, hoping that she can be the one to solve the Truly Devious case. After being accepted, Stevie brings readers along on her spiralingly exciting expedition. Johnson’s writing is full of twists and turns that make sense, making the story believable and all the more page-turning. Additionally, Stevie’s character is relatable and realistic. Stevie struggles with anxiety and her battle with that is balanced by her confident personality. Overall, Truly Devious is a thrilling mystery with lovable characters and a rollercoaster of a plot.

The Montague Siblings is a historical fiction trilogy and its first installment, The Gentleman’s Guide to Vice and Virtue, maybe one of the funniest books I have ever read. Set in the 1700s, the first book follows Henry “Monty” Montague who was born to be a gentleman. Despite this, Monty has fallen into a roguish lifestyle of gambling and underage drinking. After constant disapproval from his father, Monty is sent on a grand tour of Europe accompanied by his younger sister Felicity and closely monitored by a strict chaperone. As they embark on their whirlwind journey, the reader follows an entertaining historical road trip and a charming cast of characters. Each book in the series is set in the same universe and follows the same set of characters; however, each novel follows a distinctly different plot than its predecessors. The second book, The Lady’s Guide to Petticoats and Piracy, follows Felicity a year after her and her brother’s expedition. The final volume, The Nobleman’s Guide to Scandal and Shipwrecks, follows a new character and how his life intertwines with Monty and Felicity’s.

Taylor’s stunning fantasy duology Strange the Dreamer follows war orphan and junior librarian Lazlo Strange. In a world where the dream chooses the dreamer (not the other way around), Strange has always believed his dream chosen poorly. “Since he was five years old he’s been obsessed with the mythic lost city of Weep, but it would take someone bolder than he to cross half the world in search of it. Then an…opportunity presents itself, in the person of a hero called the Godslayer and a band of legendary warriors, and he has to seize his chance or lose his dream forever.” As you fall into a beautifully crafted world composed of stunning prose and lyrical descriptions, you learn the secrets of Weep and why the dream of uncovering it chose Lazlo.

The Illuminae Files is a series of three science fiction novels including a novella prequel. Kaufman and Kristoff come together to write a brilliant story set in the year 2575 when two competing corporations are at war over a planet “that’s little more than a speck at the edge of the universe.” After our main character, Kady, breaks up with her boyfriend, Ezra, she thinks nothing can be worse. That was before her planet was invaded. Kady and Ezra are forced to evacuate together with an enemy warship in hot pursuit. Their problems are multiplying as a deadly plague breaks out and the fleet’s AI may be working against them. Kady hacks through layers of data and soon, it becomes clear that the only person that may be able to save them is the one person Kady swore never to talk to again: Ezra. This series already hosts an overwhelming creative plot but on top of that, it’s visually dynamic and unique. The story is predominately told through a collection of emails, space-themed images, blueprints, and interview transcripts. Additionally, each character is powerful and memorable producing a beautifully crafted and mind-bending read.