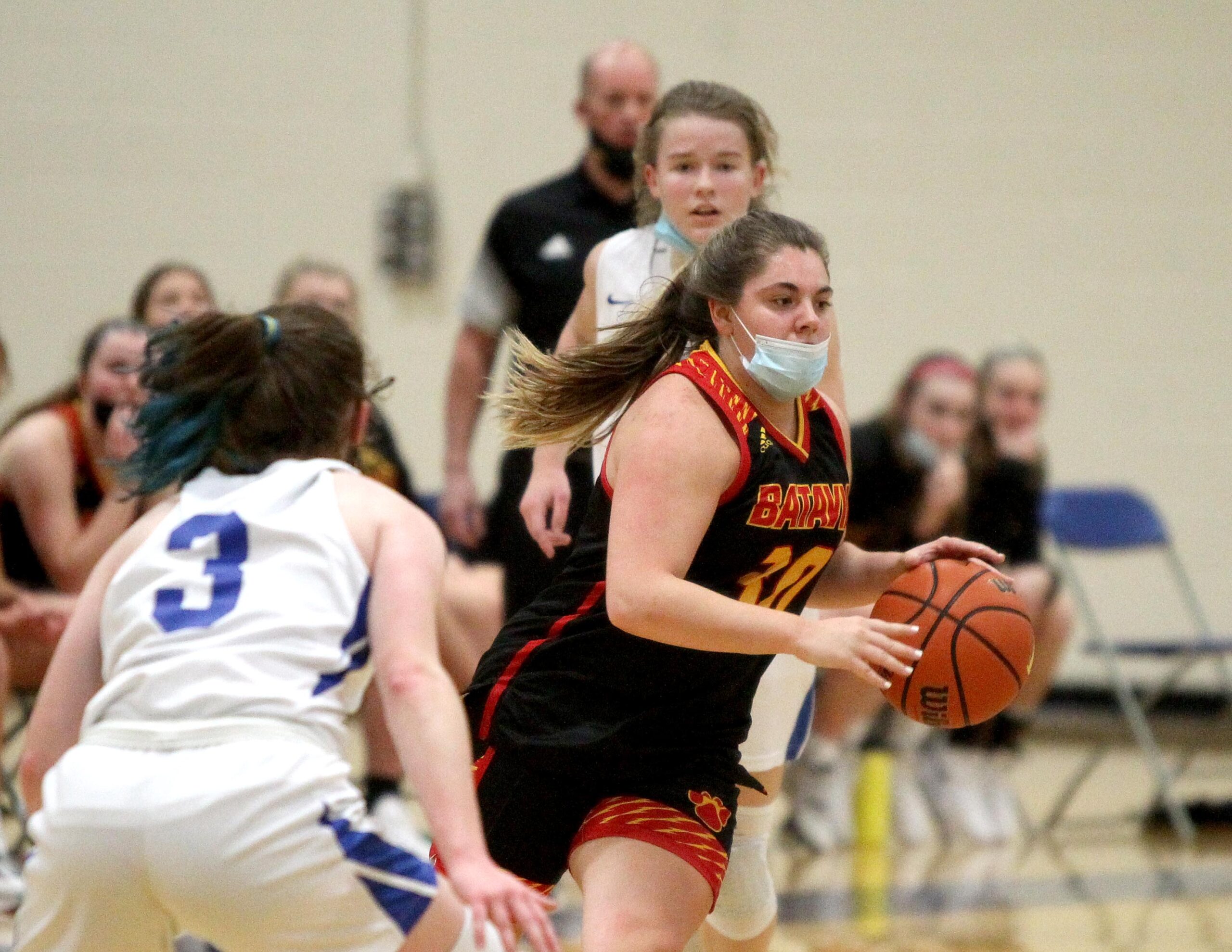 Generous, perseverant, selfless, strong, committed, and passionate. These are only some of the many attributes used by coaches, teammates, friends, and family to describe Claire Nazos.

“Claire has been a great leader throughout high school,” said longtime girls’ basketball coach Kevin Jensen.  “She is always looking out for her teammates. Her passion for this game is rarely matched by others. She cares very deeply about this sport.”

It’s 7:00 AM on a Saturday and Claire’s silver Jeep Compass is the first car in the parking lot for an 8:00 AM practice. Preseason practices were at 6:00 AM every other day for an hour. During this practice the athletes would switch between practicing drills, shooting, and scrimmaging. While some athletes choose to stay home and sleep in, Claire Nazos attended nearly every single morning practice.

“Claire on the court is the first person to pick you off the floor if you fall,” said Brooke Nazos, Claire’s cousin and teammate. “She’s the one person to cheer you up and talk you through anything that has happened. Claire off the court is someone who is always there for you and will listen to you if you need help.”

Brooke still remembers being comforted by Claire after air balling her free throw in seventh grade. Right after the airball, Brooke turned straight to Claire who laughed and said, “It’s okay Brooke, just don’t airball the next one.”

Claire has built up the trust of her teammates as well as her coaches. Due to the trust between her and Jensen, he chose her to step up and save the game on senior night.

“Claire had an opportunity to make a game-winning three-point shot on Senior Night,” Jensen said. “The shot looked great, and I thought we had just won the game. However, the ball did not go in.”

Although the team knew they had lost the game, that didn’t matter to them. The girls immediately rushed onto the court to comfort Claire in the tough moment.

Teammate and friend of Claire, Nicole McLaughlin recalled a time when Claire was there for her during an anxious time.

“I remember when we were freshmen and got pulled up to try out with Varsity,” McLaughlin said.

The perfume stenched locker room was where an anxious Claire and McLaughlin jumped and danced while screaming to Taylor Swift. The bright red lockers vibrate to the bass of the song playing on the speaker. The girls blast the music in hopes of drowning out the worries of their upcoming tryouts. Both Claire and McLaughlin ended up making the varsity team as freshmen and have been a part of it ever since.

Jacqueline Schroeder has been a teammate to Claire since sophomore year. Schroeder credits much of her success to Claire for helping her grow on and off the court.

“Playing with Claire has helped me immensely as an athlete,” Schroeder said. “She has always pushed me to do my best and motivate me all of the time. She always has my back and is my biggest supporter.”

Although many of Claire’s teammates talked about how her hard work is responsible for her success on the court, Claire shared that her pregame routine is just as important to her.

“I feel excited before every game and I feel relaxed,” she said.

Claire’s consistent game-day routine helped her to feel more prepared. Claire put on her lucky, pink, Jordan 4’s before she headed out the door and carried on with her normal school day routine. After school, she headed to Starbucks for a pink drink and back home for a sandwich. She walked into the school extra early dressed in her black shooting wear so she could get in extra shots before the game.

Claire recalled one of her favorite games being when both the varsity and junior varsity girls basketball teams took a trip to Miami in January of 2022. The trip was special to Claire because it was not only the first time ever traveling as a team but also one of the final big games for her high school basketball career. Claire was in awe of Slam Dunk Academy; she looked around at the prestigious prep school. The Miami skyline was lit with the glowing sunset shining through the clouds. Blue and green state titles hung from the gym ceiling. The number one team in Florida watched calmly as the Batavia girls’ basketball team anxiously walked in. While the Batavia team was nervous about how the game would go Claire tried her best to calm her and her teammates’ nerves. Although Batavia lost to the number one team in Florida, Claire was able to overlook the stats, be a leader, and set an example for her teammates.

“As Claire has gone through high school basketball, I think she has come to realize what is most important to her with respect to basketball,” Jensen said. “She has been able to see that statistics do not have to be the number one focus. Her ability to be a leader, to set an example, to be a great teammate, to give maximum effort and focus are all areas in which she has grown significantly over the last four years.”