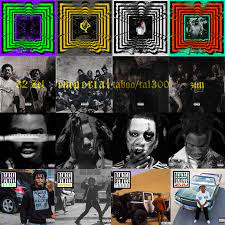 Originating in the underground music scene in Florida, the 27-year-old rapper and artist Denzel Curry has since become widely renowned and praised for his distinctive music style. His socially conscious yet aggressive lyrics have gained respect from millions. Inspired by artists such as XXXTentacion, Tupac Shakur, Rage Against the Machine, Kendrick Lamar, and countless others, Curry has developed his own unique and exciting style, incorporating multiple different genres in his music. Since dropping seven albums from the beginning of his career, some of his most famous songs include ULT, BLACK BALLOONS, Ricky, Zenith, SIRENS, and more. He has won numerous hip-hop awards and was given a spot on the 2016 XXL Freshman rappers list.

All his albums are ranked below from worst to best with a brief explanation for each.