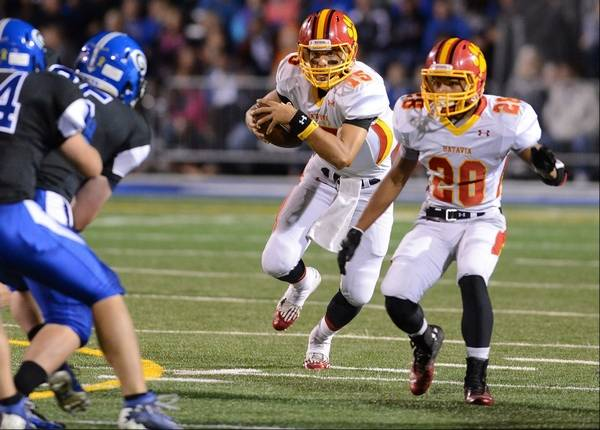 Team rivalries spike interest throughout a high school better than anything else, especially when it comes to football and cheer. Batavia and Geneva have had a strong rivalry since 1912.  This rivalry is the 72nd oldest in the whole country. I was able to interview a player and cheerleader from both schools and put their answers side by side. It may shock you to see the differences and surprising similarities between schools that have been competitors for years.

It was very obvious after the interviews were over that the football players had a much stronger rivalry than the cheerleaders. When asking a Batavia player, Quin Caithamer, what he would say if they absolutely had to say something good about Geneva he said that “They put up a good fight.”

When a Geneva player, Alex Craig, was asked the same about Batavia he answered, “My girlfriend goes to Batavia and they have a moderately good football team.”

Even in just a simple sentence you can practically feel the tension between teams. When asking Caithamer how bad the rivalry was, he responded by saying that Geneva talks lots of smack and Batavia just lets the playing prove who’s better.

Another difference would be their student sections. Craig says they really wish their fans would be more enthusiastic during football games. On the other hand, Caithamer is so grateful for how excited the fans get.

“As much as you could possibly think,” he said, “we really care about the community and ourselves and we take it as a big deal.”

Although they both, obviously, have some bad things to say about one another it’s surprising to see what they actually have in common. Both schools said football players are treated with higher respect than other students by their peers. Caithamer said they believe this could be because people understand how much hard work they have put in to get them where they are now. Also, they both said they have learned how important teamwork is. They both refer to their team as family and put them at the top.

“My favorite thing (about being on the football team) would probably be how the team feels more like a family,” Craig said. “We’re taught from day one that we’re brothers and need to be there for each other above anyone else.”

It’s amazing to see how even with them being rivals and having their differences, many of the aspects of their teams are still the same.

Cheer turns out to be a very different story despite what many believe about girls being catty and fighting each other more than males. When asked about the Batavia and Geneva rivalry, a Geneva cheerleader, Katie Mutchler, said that she didn’t think it was that bad despite what many people may believe. Although, the Batavia cheerleader, Courtney Mansour, did get more defensive with her answer, saying that “Geneva doesn’t even have a competitive cheer team this year so they’re no competition at all.”

However, both girls did have many things in common that had nothing to do with their rivals. They both said their favorite part about being in cheer is the action of a game. Mansour pointed out how in club cheer it’s only competition after competition while in high school cheer you get breaks between competing and have a chance to have fun at the games. They both also said they are disappointed that the dance teams at both schools do not garner more attention than they do, because they believe they work harder, only to be treated worse.

One final thing they both had in common is they wish the student section would cooperate more with them. Batavia and Geneva both believe their student sections do their own thing and don’t chant along with their cheers. Although these teams are supposed to be rivals it seems like they’re more caught up in what is going on at their own schools to talk much about each other.

Football and cheer. Boys and girls. Batavia and Geneva. There are so many differences and yet still so many similarities mixed in throughout all of these different categories. It was clear that the football players fed into the rivalry much stronger than the cheer teams, but the rivalry was still there, nonetheless. Batavia and Geneva have always been at each other’s throats and it makes for some extremely entertaining games. As long as they keep doing their thing, people will come out to watch it all happen.