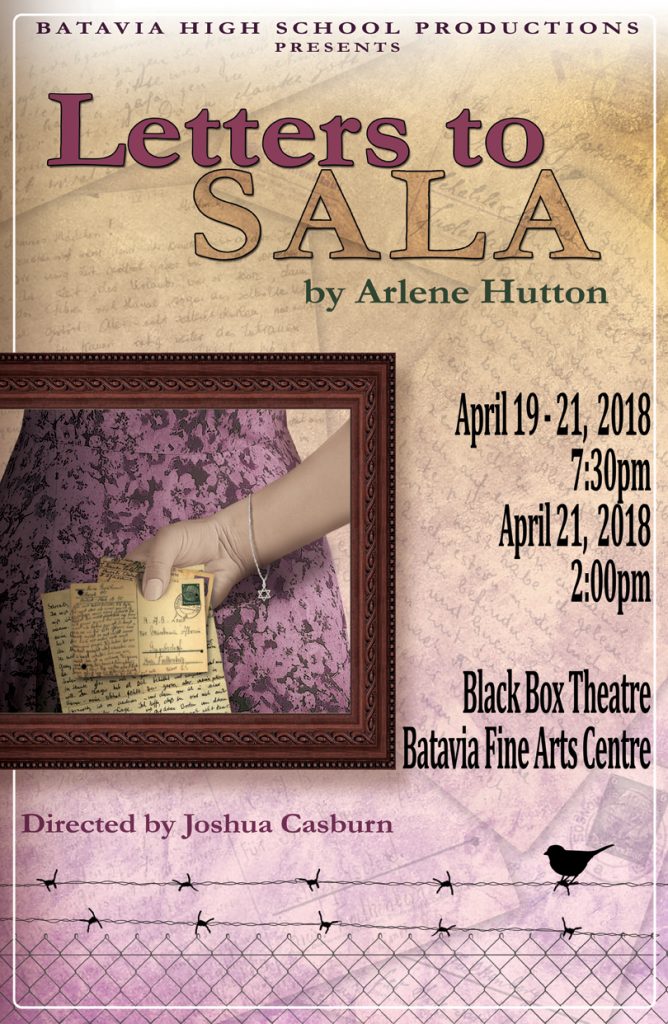 Letters to Sala is a play focused on the Holocaust, and will be performed at the BFAC from April 19-21 with shows at 7:30 pm and matinees at 2 pm during the weekend– information and tickets are available on the Batavia Fine Arts Centre website.

The theater program at Batavia High School puts on many productions– this year alone they have shown Cats and a winter play titled The Musical Comedy Murders of 1940. Last year they performed the ‘90s rock musical Rent. The performances put on by theater students are so popular that Sala even added another performance time to their run.

Letters to Sala has been an extensive process. According to Lily Rousseau, an actress in the play, the cast starts rehearsals with meditation, stretching, tongue twisters, and games. They then run through the show and work on scenes that are underdeveloped.

A lot of scenes in the show require precise timing for music and sound effects. The show is currently in its tech week, where the cast and crew practices every night to perfect lighting, staging, lines, and costumes.

“This show is really cool,” Rousseau said, “because it is about a high-school-aged girl who lived in Poland in the 1940s– her family is sent a letter saying that they either have to pay a tax or send someone to work in a labor camp. The play follows Sala and how she makes it through the camps.”

Students can relate to the character because of her age, and see how someone like them makes their way through such a horrible situation. The show also has a modern aspect to it, flipping between scenes from 1940s Poland and 2005 United States.

Director Joshua Casburn believes in the power of the play, saying: “Our rehearsal process has been emotional, but uplifting.  It is not pleasant researching or re-enacting certain events from the Holocaust… People should see this show because it is powerful.”

The show is based on Sala’s Gift: My Mother’s Holocaust Story, an account written by Ann Kirschner based on her mother’s letters during the Holocaust. The book has been greatly significant to the known information of the Holocaust, and has been coined “the greatest find since Anne Frank’s diary.”  The real Sala died only a few weeks ago, making the showing of the play very timely.

To this day, historians continue to study the Holocaust thoroughly. Many questions will never be answered, such as the exact number of people murdered during this atrocity. However, many people strive to understand the Holocaust in order to ensure that such a tragedy does not occur again. Casburn believes “… it is vital that we never forget both the depravity and the bravery displayed during that difficult time.”