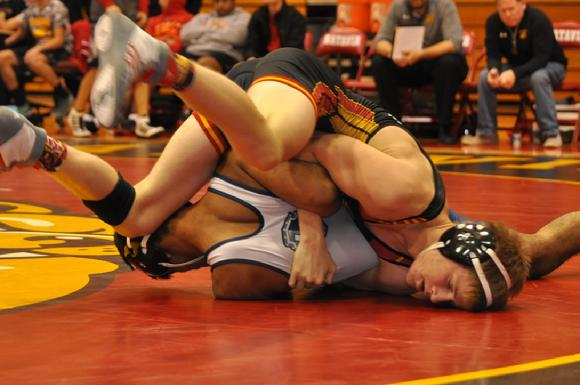 The wrestling season started Nov. 5 with a group of new wrestlers, now including girls. Coach Scott Bayer and Coach Ryan Farwell have been coaching the team throughout the summer and through preseason training. All eyes are on the team as BHS has just now created a girls’ wrestling team.

“I work my hardest in there because I know that practice will make me better and better,” said Lexxie Sliger, a new wrestler on the team. “In practice, there’s a lot of physical training but there is also mental training going on as well. Any of the guys or coaches will tell you that practice makes permanent and that wrestling teaches you discipline.”

Mr. Farwell shared that there are a lot of promising girls on the team who have really “latched onto the sport.”

Having these new athletes bring fresh potential to the team is just as important as the returning athletes who bring experience and leadership.

Some promising returners on the team according to Farwell are Alex and Angel Cruz, Mikey Caliendo, Justin Major, and Alex Richards.

“We have a few guys that could possibly get there (to the IHSA state competition), and they’re on the right track right now,” Farwell said.

And the coaches are ready to see who will step up to the line and take the lead.

The Batavia Bulldogs Wrestling website’s catchphrase is “It’s Not the Size of the Dog in the Fight, It’s the Size of the Fight in the Dog!!” That phrase pertains to sophomore Taylin Long, a transfer from Aurora Christian, who is 5ft tall.

“If you want to win you need to work hard all the time, not just in the wrestling room. And that’s exactly what I plan to do,” Long said.

Bayer explained that Taylin who is only a sophomore is already “a multiple state time champion for girls and a national champion.” He continued to say, “…she is going to be competing… for a spot on our varsity boys’ lineup.”

With only 11 girls on the team, Long sets an example for the rest of the rookies.

“She will be the face of our girls wrestling program for the next few years I hope,” Bayer said.

On that point, a lot of questions have been floating around about how practice is run with the girls wrestling right alongside the boys. Bayer and Sliger both described that wrestling is wrestling and it doesn’t matter if it’s a girl or guy.

A goal this season for Bayer is, “To not treat girls any differently, and try to make sure that I treat them like wrestlers because that’s what I expect them to be.”

The team’s first dual meet is Nov. 21 at Wheeling High School giving the team captains an opportunity to prove to the coaches that they are right for the job, as the coaches are putting their trust in the hands of the captains and allowing them to demonstrate their leadership skills, commitment and hard work to help bring the team all the way to state this season.