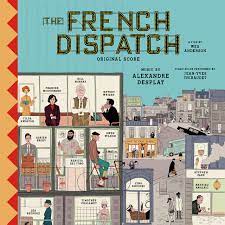 A plotless yet engaging story, unforgettable visuals, and a star-studded cast: The French Dispatch, directed, written, and produced by Wes Anderson, is one of, if not the best, movie of last year.

Released in October, the movie follows an ensemble cast of journalists trying to create the final issue of their magazine, The French Dispatch, after the editor-in-chief died. Unlike Anderson’s previous works, The French Dispatch doesn’t really follow an overarching plot, instead focusing on brief storylines representing each journalist’s article. From a bike tour of a fictional French town’s most unsavory locations with Owen Wilson to a murderous yet loving imprisoned artist played by Benicio del Toro, there really is something for everyone in this movie. However, if you don’t watch it with that in mind, it could be difficult to follow. The stories only really intersect in that they’re writing for the same magazine. Each story presents an individual theme instead of having an overall message. I didn’t mind this, but it certainly makes for an unconventional viewing experience.

If the subject matter doesn’t intrigue you, the dialogue will. The French Dispatch is packed with humor. On top of that, none of the characters ever address that what they’re saying is funny, or that the stories they’re telling are usually completely unhinged. An absolute bombshell is delivered and the characters just move right along. My personal favorite line came during the first story: “… marauding choirboys half-drunk on the blood of Christ stalk unwary pensioners and seek havoc.” My dad and I quoted that for weeks.

I can’t talk about this movie without bringing up the visuals. In typical Wes Anderson style, every shot is eye-catching and artistic. Many shots seem to be nods to The French Dispatch’s inspiration, The New Yorker, which always features elaborate cover art. The set design and color palette are what make this movie. One story occasionally veers into animation during its action scenes, which is also beautiful.

The French Dispatch is one of those rare movies where every actor or actress delivers. The cast list is too extensive for me to name all of them, but I thought the most standout performances came from Jeffrey Wright as food columnist Roebuck Wright, and Frances McDormand as Lucinda Krementz, a journalist covering a student protest. Timothée Chalamet, Tilda Swinton, and Lyna Khoudri also executed their roles very well.

The French Dispatch was thoughtfully made, funny, and all in all lovely to watch. I couldn’t recommend it more.