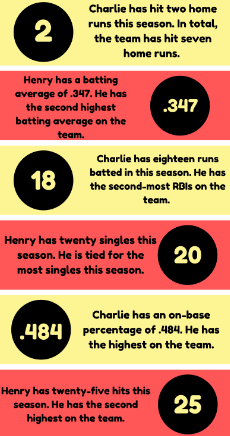 “They have an unspoken bond that is undeniable. They can just give each other a look and both will understand what’s going on,” said head varsity coach Alex Beckmann.

Brothers Charlie and Henry Saul have bonded over baseball since they were little. For the past two years, they have been on varsity for Batavia High School together with Henry playing catcher and Charlie playing outfield last year and first base this year. The team didn’t have a first baseman at the start of the season forcing Charlie to adapt and fill the position instead of playing his usual, right field. Both are starters on the team. They support and challenge each other during the game, and work hard for each other and for the benefit of the team. Being leaders on the team, their energy influences other players, as well.

“They are two leaders so when they are rolling, the whole team is too,” said teammate and friend Austin Winslow.

No set of siblings is perfect and the brothers have their fair share of fights. They know to keep it off the field so that it doesn’t impact their main goal of succeeding as a team.

“They don’t take up time from the team or practice having their little temper tantrums with one another. The two of them lead by example and treat each other as teammates and support one another when it’s baseball time,” said coach Brian Krolikowski.

As the music starts playing from the dugout, the Saul brothers walk out to the plate and the stats show that the team is in good hands. They worked hard individually and together to be strong enough players to bat first and second. Being a catcher and first basemen they always need to be on the same page and constantly be aware of where the other team’s runner is so that they can try to throw him out.

“Sometimes he just looks at me pretty funny and I know he is going to throw the ball over and stuff like that we just know to do,” Charlie said. Charlie sees Henry’s eye black-filled face and switches his stance to be ready to catch the fast-paced ball for a hopeful out. Their connection makes promising plays run smoothly.

Charlie fills the role of “Big Saul”, and Henry “Little Saul.” Baseball only strengthens the connection between the two and helps out the chemistry and the energy of the whole team, according to Charlie.

“We already had a strong connection before baseball and then it helps us get along better on the field and build a better environment on the team because we are funny around each other,” Charlie said.

As Charlie moves on from high school baseball to continue onto bigger things at Hope College, Henry has the opportunity to “step up to the plate” and create his own style of leadership next season.

Over their years playing baseball both Charlie and Henry have had to go through different challenges to get to where they are now. Charlie had surgery on both of his hips during sophomore year. He had to go through rehab and worked his way to the top to earn and hold a starting position for the past two years.

“I had to rehab through all that but I got through it and I’m happy for that,” he said.

Henry’s challenges weren’t physical but still forced him to grow as a player and person. Henry went from playing eighth-grade baseball with pitchers throwing low 70s to playing varsity his first year at Batavia with pitchers throwing mid to high 80s. He had to quickly adapt to new speeds to prove himself on the team.

As Charlie’s high school career comes to a close, the two reminisce on their time together.

“I feel like having him on my team makes me work harder and reach towards a goal that I want to reach,” said Henry.

With the current seniors going their separate ways, they embrace their time left together.

“… it just feels right being on the same field as them,” Winslow said.

All of them are holding onto past memories while anxiously awaiting their next steps toward college. The brothers only have one more guaranteed game together as the season comes to a close and they attempt to make a playoff run. They play Tuesday against Lake Park in Geneva at 4:30.

“I think right now they’re just enjoying the time they have left playing on the same field together,” Beckmann said. “It’s not very often siblings get to do that. We would be an entirely different team this year if we didn’t have them.”