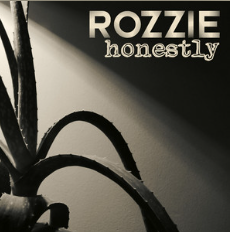 Rozzie Line stands alone, swaying slightly beside amps and multicolored wiring. She strums a pastel green guitar and hums “Fade Into You” by Mazzy Star into the microphone. The singer/songwriter is serenading Cafe & Barr in Geneva, and she is unwavered. It’s not surprising that Line is calm and collected on stage- at age 15, she’s already been performing music for 13 years.

Line has lived and breathed music for as long as she can remember. When songs get stuck in her head, she doesn’t hesitate to sing them out loud. She’s been playing piano since she was a toddler, now playing a repertoire of instruments, and has performed professionally in two cover bands and as a soloist since 2021. Now, it’s all coming to fruition.

Honestly, Line’s first album, was released last Friday. It’s been a long time coming; writing began two years ago, when Line was 13, and it took about six months to record and produce. She’s also been previewing songs on her Instagram since September. It is available on all music streaming platforms, as well as for 10 dollars on Bandcamp.

Line has trouble categorizing the album into a genre, as she tried to incorporate several different styles in order to keep the listener’s attention, but considers it indie or indie rock if she had to pick one. Each song is an original written by Line, and she provides the guitar, piano, and vocals. Keith Homel and Brian Kovacs supplied the drums and bass respectively, and make up the rest of Line’s cover band. Kovacs produced the album, as well.

Many songs on Honestly are emotionally and politically charged, as Line considers music to be her creative outlet. In times of trouble, she makes music. One song on the album, “You Can’t Save Me,” was an effort to reach out to those struggling with their mental health, to let them know they’re not alone. Another, “What Are We Going To Do,” was conceptualized during quarantine, and Line’s realization that those we considered leaders were not truly leading, just “talking the talk and not actually walking the walk.” Sometimes, Line doesn’t even fully understand the connotations behind her lyrics.

“I’m sure my songs have deeper meanings but I’m not 100 percent sure what they are,” she said. “I kind of put my emotions into a song and then they’re just out there without me fully understanding what those emotions were.”

Line is also the lead singer and plays guitar and bass for the band Rozzie and the Rioters. The band was created in February for Amnesty International’s “Jamnesty,” a concert to raise money and attention for human rights. Rozzie and the Rioters features Salaene Rowen on piano and keyboard, Kera Kennaugh on vocals, Aaron Perrault on percussion, and Annaka McQuillan on tambourine. They performed “Too Close” by Sir Chloe and “Cancer” by My Chemical Romance, both of which the group considers inspirations.

Although it was started for Jamnesty, the group seems to want to continue playing together, and perhaps write their own music instead of covering songs.

“Honestly, I just thought it would be fun to try out being in a band, and wanted to hang out with Rozzie more since I thought she was a really nice person. So far I’ve been very correct,” said Kennaugh, a sophomore vocalist, percussionist, and colorguard member.

This sentiment is shared by Salaene Rowen, a freshman pianist and percussionist.

“I especially thought that joining this band would be interesting because I get the chance to play something that wasn’t related to mallet or battery percussion, and it is also very nice to be able to work with my friends,” Rowen said.

Since Jamnesty, the band has not played another live show. However, most members would like to.

“If more opportunities arise, I’m sure there will be more live shows,” said McQuillan, a sophomore percussionist.

Line knows all about live performances. She’s been doing piano recitals since she was three, and has played in a cover band with Kovacs and Homel. But right now, Line is focused on performing her original music, as well as solo covers. She frequents coffee shops, restaurants, and the occasional bar. These gigs can take hours, sometimes lasting well into the night. Due to the locations of shows, Line sometimes finds herself playing for sizable groups of people. Despite all this, Line says she doesn’t struggle with stage fright. After all, she’s been doing this for over a decade, and she’s not stopping anytime soon.

“People have like, their journal, their diary,” she said. “I just play music.”