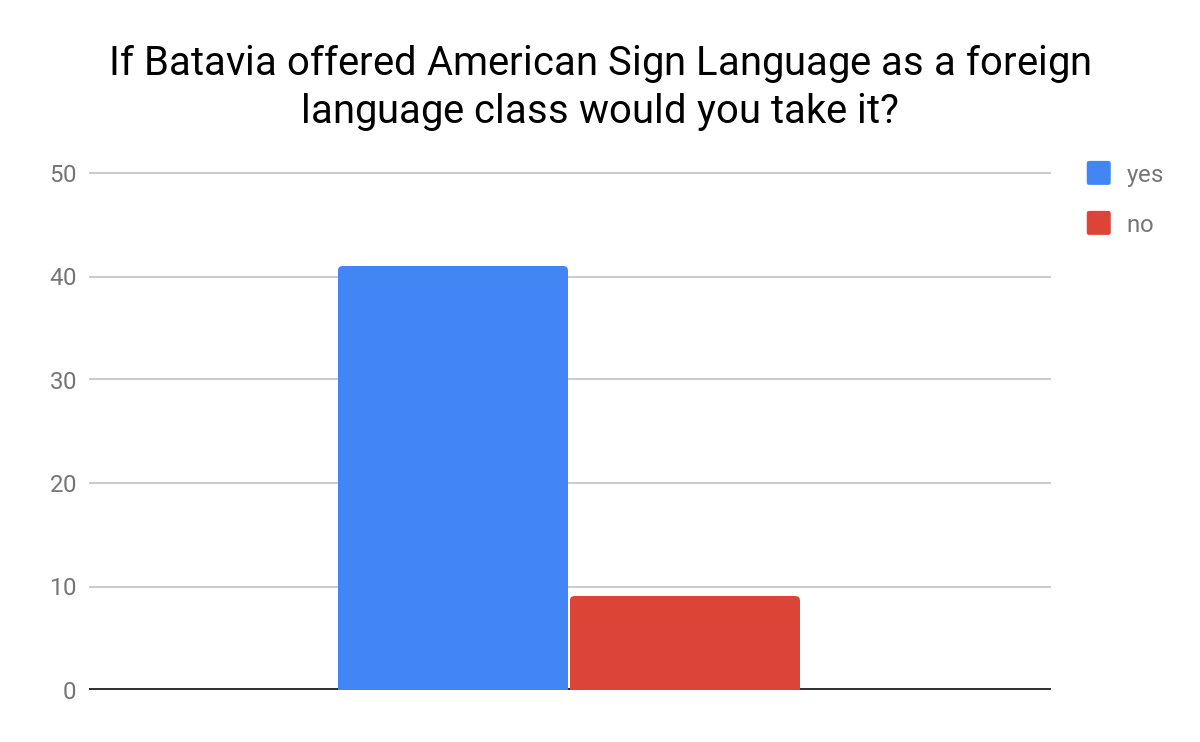 Here in the United States, American Sign Language (ASL) is the sixth most used language, and yet our school teaches an unofficial language, Latin. Our nation strives to push Americans to learn other languages so that we can further grow and develop into a successful society. Evidently, a vast wall looms between the hearing world and deaf community. Hence why BHS should start instituting ASL as a foreign language class. Why don’t we BHS students and staff members start to tear down this immense wall between the deaf community and the hearing world that we take for granted.

“Illinois: Yes. American Sign Language is recognized as a foreign language for high school credit. This allows up to four years of class credits, and one year of credit for demonstrated proficiency.”

This quote was provided by the state commission of deafness. If Illinois as a state has agreed upon this term, why shouldn’t Batavia High School take advantage of allowing students to become familiarized with deaf culture? In recent years, the drive and support for instituting ASL as a foreign language class at high schools and even colleges has gone up considerably stated by The University of Vermont.

A hearing woman here in Batavia, Donna Deats, translates her church’s service to a deaf man every Sunday, she said, “The greatest blessing of learning ASL is that when you meet a deaf person they are grateful you know their language since so few hearing people do.”

There is a vast amount of people who are isolated from the rest of the world as they watch the world pass them by. The deaf community is so unnoticed and forgotten yet so unique and breathtaking as such a beautiful language gets pushed aside by the fast-paced world of today. Sign language keeps you actively engaged in a conversation as your focus gets pushed to having a real conversation with someone rather than scrolling through Instagram.

When using sign language in class, it allows for a quiet setting to be able to learn and communicate with others without being bombarded by the everyday chaotic noise of a regular classroom.

The Survey of Income and Program Participation (SIPP) did a survey in 2006 and found that on average 1 in 20 Americans are currently deaf or hard of hearing. Another source mentioned that 360 million Americans are either deaf, hard of hearing or able to hear faintly. The deaf community is so much bigger than we think and our academic pursuits should begin to acknowledge others outside our own secluded environments.

“…the only issue that I have is how many students will be able to get into the course. We base our courses here at the high school on the students, and what they want to take…” said Mr. Dietz; associate principal of academics, “All of our courses are designed around what students want.”

When asked, 82 percent of the 50 BHS students surveyed said they would take ASL if offered. If students are genuinely interested in taking ASL as a course here at BHS, the school system should work to expose students to be more involved with the deaf community.